Kenosha Girl Stabbed in the Back by Woman Muttering about Satan 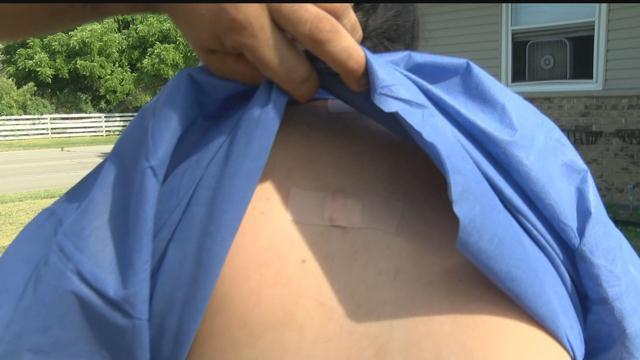 A little girl heading to a birthday party was stabbed in the back while her family was just feet away. The woman who stabbed her was seemingly in the middle of a mental episode.

At a home in Kenosha at the corner of 88th Street and 39th Avenue, 12-year-old Josephine Zamora was going to a birthday party when she forgot the present inside her home. She went inside to get the present when a woman followed her inside and stabbed her twice in the back with a six to eight inch filet knife.

Josephine, who is a student at Lance Middle School, says she has no idea who the woman was or why she followed her inside the home just before noon on Sunday.

After the stabbing, Josephine says the woman pushed her onto a couch and that’s when family members and neighbors got involved.

Josephine's dad, who was in the car ready to take his daughter to the birthday party, started throwing objects at the woman including a boot and a container of detergent. Josephine's mom grabbed a pan, but it was a neighbor who came in with a bat that scared the suspect out of the house.

Kenosha Police did arrest that woman soon after. They say she's a 34-year-old who lives near the area.

Neighbors say she was acting unhinged and was muttering about the devil.

Josephine says it was a shocking situation that's she's still numb to, “I didn’t even know what happened until the blood started dripping down my back. Like I didn't even know she stabbed me. It was just chaotic. They were all just like shocked, but they knew what was going on. Like my siblings were crying, my mom was crying and talking on the phone, and my dad he was chasing after her."

Kenosha Police say the suspect will be charged with first degree attempted homicide. Her name will be released once that happens.

Josephine suffered from two stab wounds: one was an inch deep, the other about three inches deep. Fortunately both missed all organs and she's expected to make a full recovery.