WAUWATOSA, Wis. (CBS 58) -- When a Wauwatosa homeowner heard his home was on fire, his first thoughts were for the safety of a beloved pet. Thanks to a Good Samaritan, the two have now been reunited.

Wauwatosa firefighters were called to a home near 68th and Terrace Court around 10:30 a.m. on Tuesday, Sept. 22.

"It was a stubborn fire that got up into the attic ... We vented the attic and a passerby was able to rescue one pet," said Robert Randow, a battalion chief with the Wauwatosa Fire Department.

That passerby was Joe Loduha, a former EMT, who said he saw black smoke in the air as he drove down 68th on his way to a carpentry job.

"There was already a neighbor outside, and he was calling 911. I jumped out and just asked him, 'Is anybody inside?' He said, 'I don't know' and I decided to get in to see if anybody was in and sleeping," Loduha told CBS 58.

As firefighters headed to the house, the homeowner, Patrick Otis, wasn't home.

"My neighbor called me while I was at work saying I gotta get home. The house is on fire. My first reaction was: 'Where's my dog?'" said Otis, who goes by "PJ."

"(She) looked at me like she was ready to go for a walk. I carried her out, gave her to the neighbor," Loduha said. 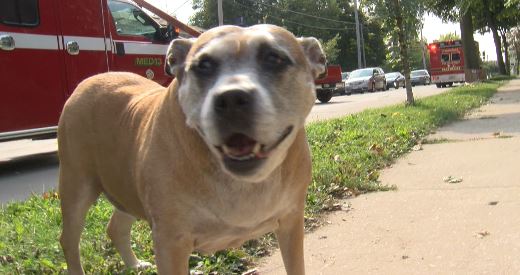 CBS 58 was there as Otis was reunited with Darma for the first time. Otis and Loduha, previously strangers, hugged and shook hands as Otis thanked him.

"That extinguished my fire in my heart. It's simply enough that she's alive. The house can be rebuilt," Otis said.

Loduha sustained some cuts on his hand and leg and took in some smoke. But said he doesn't consider himself a hero because the firefighters are the real heroes.

Otis said he plans to continue to show gratitude to the man who rescued his rescue.

"I appreciate what Joe did, and I want to pass it on somehow, someway," he said.