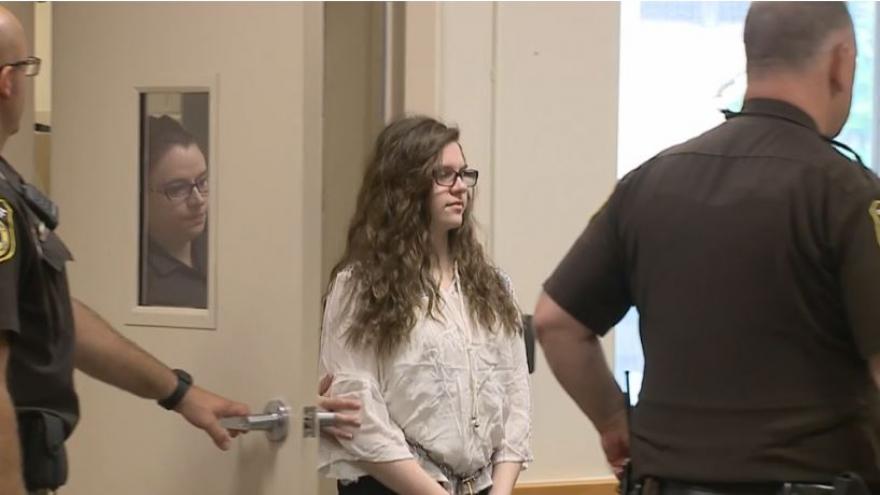 MADISON, Wis. (AP) — A jury this week will begin weighing the mental competence of a girl accused in the stabbing of a classmate to please a fictional horror character known as Slender Man.

Jury selection begins Monday in Waukesha in the trial to determine 15-year-old Anissa Weier's competency. It could take up to two weeks. Here are a few key things to know about the case and the trial:

Prosecutors allege that Weier and her friend, Morgan Geyser, lured a classmate into a Waukesha park on May 31, 2014 and stabbed her 19 times. The girls have said it was an effort to please Slender Man and become his servants, or to keep the character from attacking their families. All three girls were 12 years old at the time. Weier and Geyser left the classmate for dead and starting walking to the Nicolet National Forest, where they hoped to join Slender Man in his mansion. A passing bicyclist found the classmate, who survived, and Weier and Geyser were captured later that day.

Waukesha Police say two 12-year-old girls, Anissa Weier and Morgan Geyser, obsessed with online horror stories lured their 12-year-old classmate into a wooded area where one girl held the classmate down and the other stabbed her 19 times.

According to police, the 12-year-old classmate was able to crawl out of the wooded area where she was stabbed and was eventually discovered by a bicyclist. She was then rushed to the hospital for surgery.

A Waukesha County Sheriff’s Deputy reportedly finds Anissa Weier and Morgan Geyser walking near I-94 the afternoon following the stabbing.

Anissa Weier and Morgan Geyser are being held on charges of attempted first degree homicide. Police recommend both be charged as adults.

The stabbing victim is released from the hospital. Doctors say had the knife gone a millimeter deeper, the girl would have died.

Judge rules both Anissa Weier and Morgan Geyser are competent to stand trial and will be tried as adults, despite multiple appeal attempts by the suspects’ lawyers to have them tried in juvenile court. Judge orders both girls will be tried separately.

Anissa Weier, 15, pleads guilty to attempted second-degree homicide as party to a crime, with use of a deadly weapon. Jurors will have to decide whether she is legally responsible for the crime or not guilty by reason of mental illness. If found guilty, Weier could face 10 years in prison and 10 years of extended supervision. The judge made it clear to Weier that he is not required to follow the state's recommendations. The maximum penalty is 35 years. If she is found not guilty by reason of mental illness, Weier will spend three years in a mental hospital. Jury selection for Weier’s trial begins Monday, September 11.

WHAT ARE THE CHARGES?

Prosecutors charged both girls with being a party to attempted first-degree intentional homicide. Weier struck a deal with prosecutors in August in which she pleaded guilty to being a party to attempted second-degree intentional homicide, essentially acknowledging she committed all the elements of the offense. But she also has pleaded not guilty due to mental illness, meaning she believes she isn't responsible for her actions. The jury will decide whether she was indeed impaired.

WHAT'S AT STAKE FOR WEIER?

WHAT DOES THE EVIDENCE REVEAL ABOUT WEIER'S MENTAL STATE?

Weier told a judge during her plea hearing in August that she believed Slender Man would attack her and her family if she didn't kill the classmate. Psychologists have testified that she suffered from persistent depression and a delusional disorder linked to schizotypy, a diminished ability to separate reality from fantasy. It's unclear what evidence Weier might present. Her attorney, Maura McMahon, didn't return a voicemail. Waukesha County District Attorney Susan Opper declined to comment on evidence or strategy.

HOW WILL THE TRIAL WORK?

Jury selection will begin Monday, and Waukesha County Judge Michael Bohren has set aside up to two weeks for the trial. A valid verdict needs at least 10 of the 12 jurors to agree. The defense has the burden of proving Weier was mentally ill at the time of the attack and whether, as a result of that illness, she couldn't appreciate how wrong her actions were or follow the law.

She has pleaded not guilty to being a party to first-degree attempted homicide. Her trial is set to begin Oct. 9.

WHAT DO EXPERTS THINK ABOUT THIS CASE?

In Wisconsin, anyone 10 or older charged with attempted first-degree or second-degree intentional homicide is considered an adult. Cecelia Klingele, a University of Wisconsin law professor who researches sentencing policy and the consequences of convictions, calls the case a tragedy for everyone involved. The victim suffered serious injury and the other girls clearly needed guidance that they didn't get, she said. But trying to punish children through a system designed for full-grown adults doesn't make any sense, since in almost all other circumstances, the state recognizes that children are not as responsible as adults for their actions.

"We wish to thank District Attorney Opper and her staff for the incredible work they have done on behalf of our entire family.

It has been more than three years since our daughter was brutally attacked by two classmates who premeditatedly and meticulously planned their assault in an attempt to kill our daughter.

These three years have been very difficult both physically and emotionally for Payton and our family.  Paramount in our decision to accept today’s plea agreement is that it provides closure without having to have Payton testify and be forced to relive this horrific incident.

Though perhaps not to the extent in which we would hope these assailants be punished, we are forced to work within the confines of current law.  Ultimately, our decision is what is best for our beautiful and amazingly brave daughter, Payton.

Lastly, we want to thank so many caring people from around the globe, many we will never meet, for the prayers, words of encouragement and support during this difficult journey.

God bless you all."