John Kerry in Geneva hospital after bike accident in nearby France 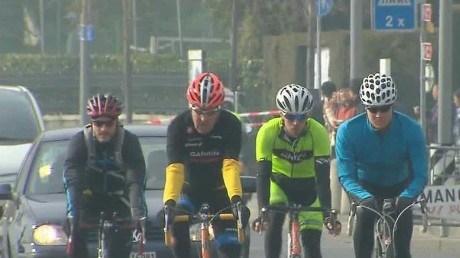 The injury is near the site of a previous hip surgery, so Kerry will return to Boston on Sunday for treatment at Massachusetts General Hospital with his doctor who did the prior surgery, the spokesman said in a statement.

He was not, as reported earlier, en route to Boston on Sunday morning. Though a senior State Department official originally said that was the case, Kirby later said Kerry was resting comfortably at a Geneva hospital, where he would remain for the rest of the afternoon. He will depart for Boston on Sunday evening, Kirby said.

\"In the interest of time, and so as not to further delay those traveling with him, we will dispatch his aircraft back to the United States with the traveling party aboard,\" he said, adding that Kerry will fly on a plane \"outfitted to ensure he remains comfortable and stable.\"

(ISIL is another name for the terror network, ISIS.)

The secretary is stable, his injury is not life-threatening and he should make a full recovery, Kirby said.

\"Secretary Kerry is in good spirits and is grateful to the French and Swiss authorities, doctors, and nurses who assisted him after the accident,\" the spokesman said.

It can take six months or more for a femur, the thighbone, to heal, depending on the nature of the break, according to orthopedic websites.

Kerry was flown by helicopter to a hospital in nearby Geneva, Switzerland, for examination, Kirby said earlier.

\"Paramedics and a physician were on the scene with the Secretary's motorcade at the time of the accident,\" Kirby said. He received initial medical care at the site of the crash.

Kerry had traveled to Geneva for negotiations with Iranian diplomats on that country's nuclear program. He was cycling about 30 miles from the city, which is close to France.

The secretary is an avid cyclist who also took his bike to the region in March, when he met previously with Iranian diplomats.

Kerry injured his shoulder in a 1992 cycling accident.