John Glenn, First American to Orbit the Earth, Dead at 95 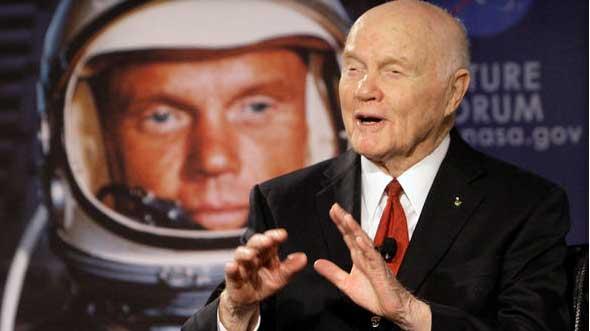 (CBS NEWS) John H. Glenn Jr., a decorated combat veteran and test pilot who gained worldwide fame as the first American to orbit the Earth, went on to become a U.S. senator and, in the autumn of his life, returned to space aboard the shuttle Discovery, has died. He was 95 years old.

Glenn had been hospitalized at the Ohio State University James Cancer Center. Details of his illness were not disclosed.

Glenn, the quintessential right-stuff astronaut, was the last surviving member of the original Mercury 7 astronauts.

Glenn’s career reads like the stuff of fiction: a gung-ho patriot Marine who married his childhood sweetheart, flew dozens of combat missions in World War II, the Korean conflict, served as a Navy test pilot and set an aviation speed record in a military jet before his selection in 1959 as one of the first seven Mercury astronauts in the initial chapters of the Cold War space race.

In an age when the word “hero” has become commonplace, Glenn was hesitant to apply the term to himself. But by any standard, he stood as the personification of the word to millions of Americans who lived through the Cold War and the space race with the Soviet Union.

“I think people need heroes,” Glenn told CBS News in a 2012 interview. “I don’t know whether I am one or not ... but if we can help encourage some of the young people of today in ... their education and technical matters also, it’s well worth the effort.”

The battle for the high frontier began Oct. 4, 1957, when the Soviet Union shocked the world by launching Sputnik 1, the first artificial satellite. Within two weeks, writes Tom Wolfe in “The Right Stuff,” a “colossal panic was underway” in the United States.

“Sputnik 1 had become the second momentous event of the Cold War,” Wolfe  wrote in his 1979 bestseller. “The first had been the Soviet development of the atomic bomb in 1953. From a purely strategic standpoint, the fact that the Soviets had the rocket power to launch Sputnik 1 meant they now also had the capacity to deliver the bomb on an intercontinental ballistic missile. The panic reached far beyond the relatively sane concern for tactical weaponry, however. Sputnik 1 took on a magical dimension. ... Nothing less than control of the heavens was at stake.”

Glenn agreed, saying later that “people today tend too much to forget what it was like back in those days. They don’t remember the national psyche back then. It was communism versus our form of government, and the Soviets at that time were saying that they were now superior to us in technology and research.”

Extremely competitive, in top-notch physical shape and with a charismatic persona, Glenn fit the astronaut-hero image and many believed he would be the first American in space. He wasn’t. He followed Alan Shepard and Virgil “Gus” Grissom who both made short up-and-down suborbital test flights aboard relatively modest Redstone rockets.

But in the end, Glenn achieved the greatest fame when he rode a more powerful Atlas rocket to became the first American in orbit, restoring national pride in the wake of Russian cosmonaut Yuri Gagarin’s pioneering orbital flight a year earlier. Glenn’s fame and popularity were so widespread that President Kennedy reportedly ordered NASA managers not to let him fly in space again for fear America’s iconic spaceman might be lost in an accident. But decades later, in 1998, he would reprise his role as astronaut-hero with an unprecedented return to space at the age of 77.

John Hershel Glenn was born July 18, 1921, in Cambridge, Ohio. He earned a bachelor of science degree in engineering from Muskingum College in New Concord, Ohio, and was commissioned in the U.S. Marine Corps in 1943. Flying F-4U fighters, Glenn completed 59 combat missions in the Pacific theater of operations during World War 2.

He flew another 90 combat missions during the Korean War, including 27 at the controls of F-86 Sabrejet fighters as an Air Force exchange pilot. During the last nine days of the conflict, he shot down three Russian-built MiG jets during intense dogfights along the Yalu River.

After a post-war stint patrolling the North China Sea, Glenn attended the U.S. Navy’s test pilot school at Patuxent River, Maryland, helping evaluate a variety of high performance aircraft. In July 1957, while serving as a project officer for the F8U Crusader jet, he set a transcontinental speed record, flying from Los Angeles to New York in three hours and 23 minutes.

At Edwards Air Force Base in California, highly skilled test pilots already were flying to the very edge of space in X-15 rocketplanes. An upgraded orbital version, a true spacecraft that would be launched by a powerful Titan rocket and land on a runway, was on the drawing board.

But the Cold War panic sweeping America left no time for such methodical, long-range planning. In 1958, President Dwight Eisenhower signed the National Space Act, creating an open, civilian space agency - the National Aeronautics and Space Administration - to explore the new frontier. And the first item on the agenda was to put a human being into space as soon as possible.

The result was Project Mercury. Instead of a winged spacecraft like the planned X-15B or X-20, NASA opted for a tiny one-person capsule that could be launched by existing Redstone and Atlas rockets. The human passenger -- no one thought of him or her as a pilot -- would serve as a medical test subject and observer. Just about any reasonably healthy, reasonably intelligent person would suffice.

But to eliminate the prospect of civilian daredevils in space, Eisenhower ordered NASA to select the initial Mercury astronauts from the existing pool of 540 military test pilots. The candidates had to be no older than 39, no taller than five feet 11 inches and have at least 1,500 hours flying time in jet aircraft.

From the 110 men who met the basic criteria, NASA ultimately chose seven based on the results of an exhausting battery of physiological and psychological tests.

In April 1959, the Mercury Seven were introduced at a crowded news conference: Alan Shepard, Virgil “Gus” Grissom, Donald “Deke” Slayton, Gordon Cooper, Scott Carpenter, Walter Schirra and John Glenn. All seven were awarded instant hero status by an adoring media and predicting which one would become the first American in space became a national pastime.

The first two Mercury flights were to be sub-orbital up-and-down missions using Redstone rockets. The primary goals of these 15-minute cannonball shots were to prove a human being -- and the Mercury capsule -- could function in the weightless environment of space. Starting with the third Mercury flight, more powerful Atlas rockets would boost astronauts into orbit.

Keeping America in suspense, NASA announced Shepard, Grissom and Glenn were all in training for the first mission. Most observers believed the determined Glenn would win the assignment, but they were wrong. Shepard ultimately was assigned to the first mission, Grissom the second and Glenn the third.

But the Soviet Union upstaged NASA again on April 12, 1961 -- just three weeks before Shepard’s flight -- when Gagarin was successfully launched on a one-orbit flight. Shepard’s mission was a success, as was Grissom’s on July 21. But up-and-down sub-orbital flights, while important, were simply not in the same league as Gagarin’s feat.

The Russian triumph “was a real blow,” Glenn said. “It took on the context not just of a space race. They were using what they claimed as their superiority to sell their brand of government, sell communism, and this was a real thing to be considered back in those days.”

And so the stage was set for John Glenn to answer the Soviet challenge and in so doing, walk into history as one of America’s most celebrated heroes.