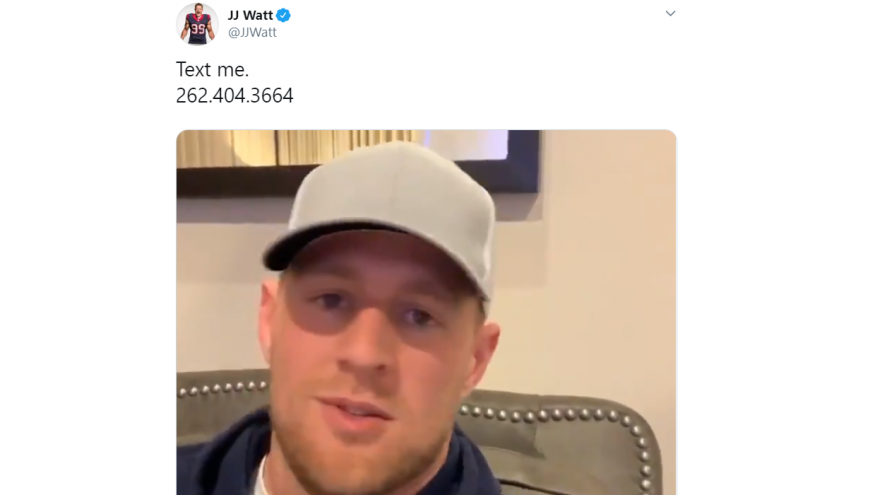 MILWAUKEE (CBS 58) — Pewaukee native and NFL star J.J. Watt is telling fans to text him and to many people’s surprise, he’s responding.

Brown Deer and Watt fan Tim Murphy texted the number Wednesday morning. Within minutes, he received a text back from Watt.

“It’s mind blowing. You never expect it,” he said. “I read the message and it mentioned Brown Deer so I knew it was him... nothing too extensive just the fact that he had some great memories playing against Brown Deer and that was about it, but even that is just really cool.”

How cool! Brown Deer native @tjmurph69 texted @JJWatt and got a response! Hear from Tim coming up on @CBS58 at 4 p.m. ? https://t.co/aRCqkOJOM3

Murphy isn’t the only lucky one. One fan told Watt his teacher would give him 100 percent on his final if Watt responded, and he did.

"Wisconsin already knew he was a genuine person and the rest of the world is just kind of catching up,” Murphy said.

Watt says within two hours of posting the number he received more than 25,000 texts. He says he’ll try to get to as many as he can, but his brother T.J. posted teasing him saying even he can’t get a text back.

The CBS 58 Morning News Team even got in on the fun.

Some of the @CBS58 Morning News crew sent a video message to @JJWatt this morning. We’ll see if he responds. Last night he posted his phone number and said ‘text me.’ pic.twitter.com/SZOrpgapAA