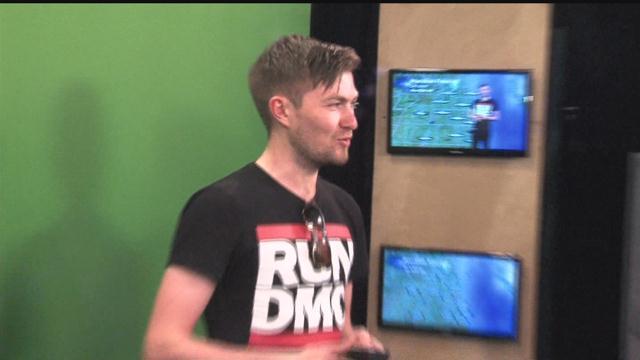 Before the party begins at Irish Fest, a select group of interns from around the world come to the Milwaukee area a few weeks in advance to learn as much as they can about what it takes to stage a music festival.

It's hoped they will learn about Americans and gain an appreciation for the shared love of the Celtic Arts and Culture.

This year's group of interns includes a researcher at the BBC in Northern Ireland.

So, CBS 58's Michele McCormack invited the group to tour the CBS 58 studios on Wednesday.

The adventures of their visit at the station were featured on  \"Our Stories with Michele\" on the CBS 58 News at 4 p.m.

The series of reports aims to bring added attention to stories about positive change in the community to give us a more complete perspective of the place we call home.

CBS 58 Meteorologist Lance Hill put the interns through their paces and had some fun at the green screen that is used to broadcast weather maps to the viewers of Wisconsin.

Isabel McLaughlin is from Galway in the Republic of Ireland. When asked about her impression of Milwaukee she answered \"I love it. It's really nice. I love the big lake. It's all really pretty around there.\"

Matthew Bradley is from County Derry in Northern Ireland and spent a year at the BBC. He says he can't wait to see the crowds gather for Irish Fest this Thursday through Sunday. Crowd estimates are around 130,000.

He also enjoys the smaller gatherings where he gets a chance to speak with people one on one.

The other interns are James  Nolan from Drogheda in the Republic of Ireland and Stephanie Finanders from Nova Scotia.