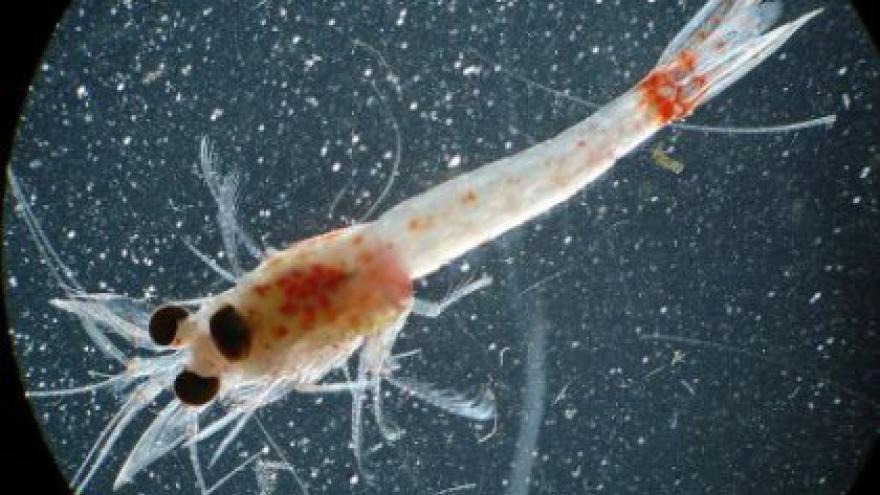 MINNEAPOLIS (AP) — An invasive species with a jarring name has turned up in Lake Superior: the bloody red shrimp.

Researchers found a single specimen of the tiny shrimp in a sample collected from the Duluth-Superior harbor last summer as part of routine surveillance for invasive species, the U.S. Fish and Wildlife Service said. That means there are now documented findings of bloody red shrimp in all of the Great Lakes. They were first found in Lake Ontario and Lake Michigan in 2006.

Bloody red shrimp, which can be ivory-yellow or translucent with varying red pigmentation in the upper body and toward the tail, are native to the Caspian Sea, which sits between Europe and Asia. The species may have reached Lake Superior in a ship's ballast water, said Jeremy Bates, an aquatic invasive species specialist with the Wisconsin Department of Natural Resources.

It's also possible the one specimen found was already dead before it was dumped, said Doug Jensen, invasive species specialist with the Sea Grant program at the University of Minnesota Duluth.

There are still no indications that the shrimp, which grow up to half an inch long, have become established in Lake Superior. The Fish and Wildlife Service said in its announcement last week that the species, like other invasive species, has the potential to out-compete native species and disrupt food webs. But the other scientists said it's not clear yet how big an impact the bloody red shrimp might have on Lake Superior.

"They do form swarms and can look intimidating. But since there's only been one found we don't know whether or not it's really a widespread introduction or if this is just something where one happened to get up here," Bates told Minnesota Public Radio .

While they could compete with other zooplankton-eating fish, they could also represent a new food for fish species that eat native freshwater shrimp.

And it's not at all certain that the species will become established in Lake Superior, he said. More than one would have to arrive, survive, successfully compete for food and find mates to breed. That's a tall order, he said.