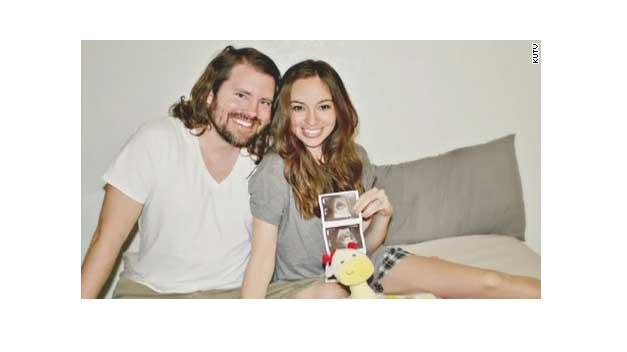 (CNN)A baby who will never know his mother now rocks to sleep most nights to the sound of her voice, thanks to the kindness of strangers on the Internet.

Four months ago, 33-year-old Jared Buhanan-Decker of St. George, Utah, lost the love of his life and wife of 12 years, Sharry Buhanan-Decker, during the birth of his son J.J.
While J.J. was successfully delivered by C-section, Sharry died of a rare condition called amniotic fluid embolism, in which the fluid surrounding a fetus enters the mother's bloodstream and causes abnormal blood clotting.
"Counting down to it as the happiest days of our life, ended up being the worst," Buhanan-Decker told CNN affiliate KUTV.
As Buhanan-Decker was going through mementos Sharry left behind, he found a surprise on his computer: six voice recordings of songs she'd written years ago.
One was a lullaby for her unborn son.
Unfortunately, the songs were in a format he couldn't convert, Buhanan-Decker told KUTV.
Desperate to hear Sharry's music, he went to Reddit for help.
Within hours, dozens of people offered to fix the file formatting. One even offered to record string accompaniments for the tracks.
"I remember one of the first ones a guy was just like, 'I'll have this done within an hour,'" Buhanan-Decker said.
Once he could finally hear his wife's voice again, the words were bittersweet.
"Baby don't worry about a thing/I'll be okay, I'll be all right," Buhanan-Decker said the lullaby goes.
Now, J.J. has a priceless keepsake from the mother he'll never meet.
"I think that on some level those [songs] definitely resonate and connect with him, hearing his angel mom's voice," Buhanan-Decker told KUTV.
Buhanan-Decker writes about J.J. and life after losing his wife on Love Sharred, a blog the couple started together before Sharry's death.
Share this article: