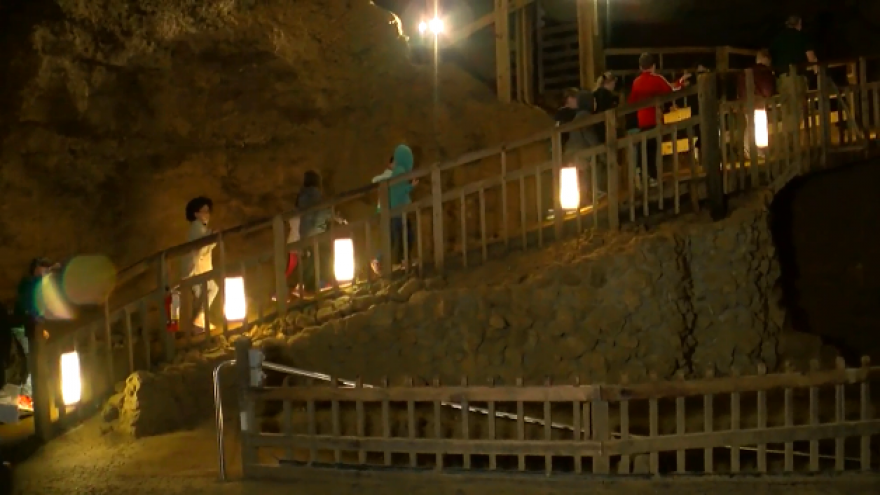 MINNEAPOLIS (WCCO) — In this week’s Finding Minnesota, John Lauritsen takes us just across the border to the Crystal Cave in Spring Valley, Wisconsin.

It’s an adventure seven stories below the Earth’s surface and, once there, you have nearly a mile of twists and turns to explore.

“There are not many places on this planet where you can be the first person ever to go there,” said Eric McMaster.

Since his college days, McMaster has been hanging around caves long enough to know that they’ve become his passion. So much so, that in 2012, he bought one.

“I was in corporate life in the city and wanted to escape the corporate world,” McMaster said.

No better way to escape than 70 feet below ground. As the proud owner of the Crystal Cave, McMaster also inherited its history.

“It wasn’t until 1881 that it was discovered by people,” McMaster said.

That’s when two farm boys chased a woodchuck into a hole in the ground. They came back the next day with rope, a lantern, and limitless curiosity. Once inside, they made an ancient discovery.

They also realized they weren’t alone. There were bats – hundreds of them.

“They are a lot smaller than people think,” McMaster said.

There are 200 bats inside Crystal Cave. While the animals here are healthy, they’ve become a focal point for researchers from across the country as they try and find a cure for the white nose syndrome — a disease that’s killing bats.

“Which is a problem because bats eat insects, they eat crop pests, so we’d like to have bats around,” McMaster said.

Bats are a part of the effort to educate and entertain throughout nearly a mile of Crystal Cave passageways. Some that McMaster himself hasn’t even explored.

“We call this particular room the ballroom because back in the early 1900’s we had a wedding in here,” McMaster said while walking inside the largest room inside Crystal Cave.

From large open rooms to small cramped corridors, stalagmites and stalactites welcome you as you walk through the inverted forest, Mary’s Maze, the wish room and the ghost room.

“It’s named after a ghost face on the bedrock. But that’s as haunted as it gets,” McMaster said.

Not only is the cave not haunted, but if there’s a tornado, this is where you want to be.

And it doesn’t matter if it’s the middle of January or the middle of July, like natural air conditioning, the temperature inside is always 50 degrees.

“It was really pretty and I liked the glowing rocks,” said visitor Jane Black.

Whether it’s the quartz crystals embedded inside:

“I think it was awesome. I just love seeing all the crystals,” said visitor Mason McCoy.

Or the furry friends that hang above:

Either way, the goal is to discover the undiscovered: A whole, new world just feet below the surface.

“They’re learning something and they are having fun,” McMaster said.

Crystal Cave has about thousand visitors a summer and is open from April through October.