Inside the Show Dome: Crews install safety material to re-open attraction by May 1 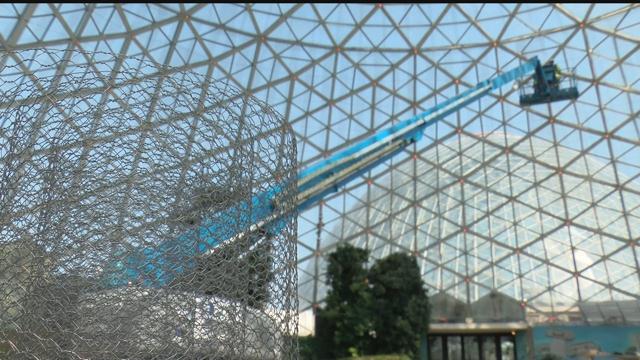 Inside the Mitchell Park show dome, a huge lift sits in the middle of it.

She's not talking about the piece of equipment, but instead what the men are installing from the end of it.

A stainless steel wire mesh covers every inch of concrete inside the show dome. So now if any cement pieces fall, the material will catch it.

"Because of the conclave shape of the structure, it has to be layered, it has to be cut to fit, we had to put brackets and cords," Folaron said.

In just a matter of days, the large crane will move out of the show dome and into the tropical dome for the same temporary repairs.

But those repairs will cost more.

Abele said about $300,000 each for the tropical and desert domes.

"The people on cranes need to work around a lot of plant life and we have to make sure we don't destroy that either," he said. "So it just takes more time, but we knew that would be an issue, but it's all covered for in the budget."

Since they've been closed, Folaron said staff has been taking care of plants and catching up on projects.

"People are going to see some differences. They're gonna see some murals in the dome," she said.

They're iconic structures, now feeding off their own safety net to survive.

"The public is very worried about the domes and anxious to see it re-open," she said.

The show dome is expected to re-open by the May 1 target date, possibly, one day early.

Abele estimates about six to eight weeks to fix the last two domes, but his ultimate goal is to have all three re-open by the end of summer.

Remember, the wire mesh is only a temporary fix with a life-span of about five years. However, that gives a committee time to come up with long-term solutions for the domes, based on the public's input.