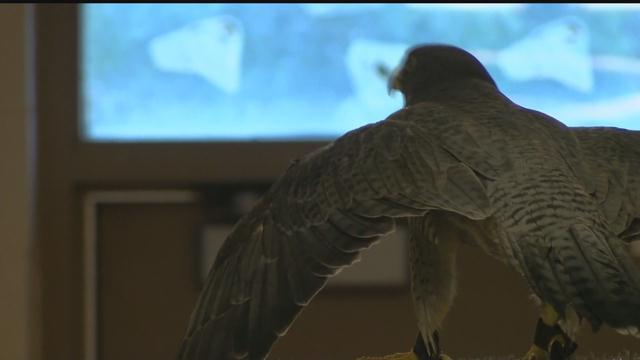 Herbert the Falcon was born atop a smokestack at a WE Energies Power Plant in Milwaukee.

Since his birth, WE Energies has tracked Herbert. He ended up finding a mate and living for many years at a nearby nest. Last spring, Herbert was found injured in a backyard in Wauwatosa.

Herbert was brought to the Wildlife Rehabilitation Center at the Wisconsin Human Society. According to Cathy Schulze at WE Energies, they tried everything to help Herbert fly. WE Energies even paid for surgery for the falcon, but he still cannot fly.

Since he can't be released into the wild, Herbert is training to become a Wildlife Ambassador.

"...they function to help us educate the public on the need for preserving wildlife," said Crystal Sharlow-Schaefer, the Wildlife Team Lead at the Rehabilitation Center.

Herbert is currently acclimating to humans. The wild bird's training involves becoming completely comfortable around people and sitting on a human's glove.