If Jeff Bezos' wife gets even a third of his wealth, she'd be richest woman in the world 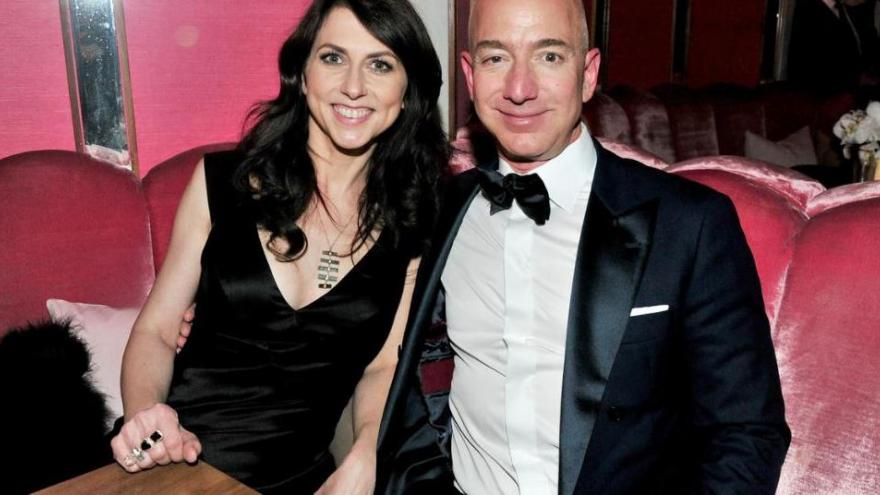 (CBS News) -- Amazon founder Jeff Bezos and his wife of 25 years, MacKenzie S. Bezos, announced their pending divorce Wednesday. It's not clear if the couple ever bothered with a prenuptial agreement back in the early 1990s, but if Mrs. Bezos were to receive even a third of her husband's current $137.2 billion net worth, she'd immediately become the wealthiest woman in the word.

A one-third Bezos stake worth $45.7 billion would vault her ahead of l'Oreal heiress Francoise Bettencourt Meyers, worth $45.6 billion, and Walmart heiress Alice Walton, worth $43.6 billion, according to the Bloomberg Billionaires Index.

Even better for MacKenzie Bezos: The 48-year-old would likely get half of her 54-year-old husband's estimated wealth, or around $69 billion, because of Washington state's status as a "community property" state, meaning all property acquired during a marriage is owned equally by both partners, and is to be divided in a manner that is fair and equitable.

"It appears obviously they have significant assets and with a long-term marriage obviously she will be receiving division of assets that I am sure will be significant given both of their circumstances," said Seattle-based family attorney Jennifer Payseno.

Amazon's origins trace back to a road trip that the Bezoses took together not long after they met in New York while working at hedge fund D.E. Shaw. They got married just six months after they began dating, according to Jeff Bezos. Not long after that, he quit his job at Shaw and started an online bookstore. While his wife did the cross-country driving, Bezos wrote a business plan on the way to Seattle — chosen for its abundance of tech talent.

By July 1995, Amazon was operating out of a garage, with MacKenzie Bezos lending a hand. "I was there when he wrote the business plan, and I worked with him and many others represented in the converted garage, the basement warehouse closet, the barbecue-scented offices, the Christmas-rush distribution centers, and the door-desk filled conference rooms in the early years of Amazon's history," she recalled in 2013.

Mr. Bezos on Wednesday tweeted a joint statement saying in part "we have decided to divorce and continue our shared lives as friends. We feel incredibly lucky to have found each other and deeply grateful for every one of the years we have been married to each other. If we had known we would separate after 25 years, we would do it all again."

That last sentence suggests no prenup, according to New York matrimonial lawyer Michael Calogero. "They were married 25 years ago and at that point they were relatively young and early in their careers," Calogero said. "A lot of people don't have a prenup at that point."

But a postnuptial agreement, or postnup, drafted after the couple was married, could be in place, especially if they experienced separations or counseling over the years.

"It would work much the same as a prenup, the only difference is it happened after the parties were married," Calogero said. "It could outline spousal support and the duration of it and how assets would be distributed in the event of the divorce."

Divorce lawyers speculate based on the tone of Wednesday's announcement that the couple has likely already negotiated a separation agreement.

"That's the way you would typically have handled this circumstance, and because the announcement came, they most likely have been working on the framework of the settlement," Payseno said. Ultimately they'll seek a divorce decree stating that the couple's property will be divided according to the agreement. "The terms will likely not be disclosed anywhere publicly," she added.

Questions loom over how Mr. Bezos' 16 percent stake in the Amazon will be divided among the future former spouses. The company's stock price closed at $1,659.42 a share Wednesday, giving Amazon a total market value of $811 billion, higher than any public company on the planet.

That 16 percent stake "will be valued and subject to some sort of division," predicted Kelly Frawley, a partner at Kasowitz Benson Torres based in New York. "[Ultimately], they will have to come up with some sort of valuation for the business and figure out what amount of that value his wife should be paid out. "

Mrs. Bezos, a Princeton graduate, is a novelist whose undergraduate work was praised by one of her professors, the writer Toni Morrison, who called her "one of the best students I've ever had in my creative-writing classes...really one of the best," according to Vogue Magazine.

She's also an anti-bullying advocate who in 2014 founded Bystander Revolution, an online resource that offers crowdsourced solutions to defusing bullying. Monica Lewinsky in 2015 joined as a strategic advisor to the organization.

The couple has four children.