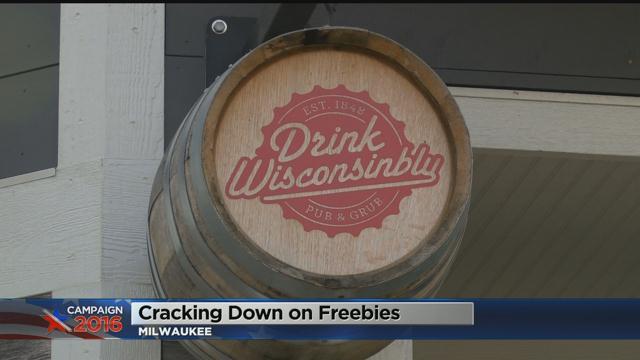 If you were looking to score some free stuff using your "I Voted' sticker on Tuesday you might not have had much luck.

The Milwaukee County District Attorney's Office cracked down on restaurants promoting voter freebies worth more than $1.

He said he had no idea that the promotion would have been illegal - adding that his deal had been listed along with others in the Milwaukee Journal Sentinel and in OnMilwaukee.

"We were just looking for the 'I Voted' sticker. A little confirmation that, indeed, you did get out and vote," Sapp said.

but the problem is that the menu price for the beer was too high: over $1. Sapp calls the whole experience odd.

"I think it's probably going to get as much conversation as the actual race itself because so many local restaurants were participating on some level," Sapp said.

Bel Air Cantina also rescinded it's offer to trade "I Voted" stickers for free margaritas. Instead they will make the free drink promotion open to everyone over 21 on Wednesday.

One suggestion offered to to these businesses that they could get around the election day rules: simply offer the same promotion to everyone in the establishment without asking if that person had voted or not. It's something Sapp said he's considering for the future.