Hundreds of Birds and Turtles Removed from Home 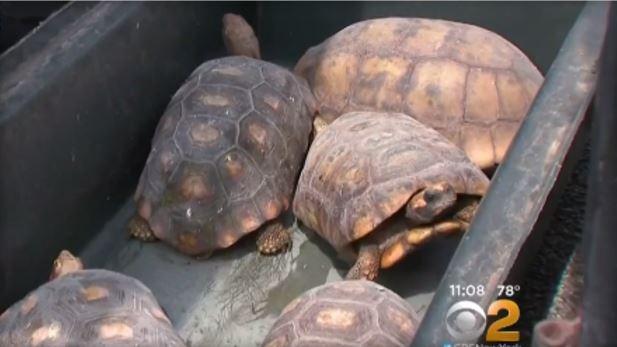 (CBSNews) BELLMORE, N.Y. -- Police removed hundreds of animals that they said were living in filth at a home on Long Island, CBS New York reported.

Authorities found approximately 276 birds -- including some large African grey parrots and macaws -- and more than 150 turtles in the two-story home in Bellmore, officials said.

"It sounded like living next to the Amazon jungle," neighbor Dawn Kephart told CBS New York. "It just blows my mind to see what animals are coming out."

There was also a skunk, prairie dogs, and marsupials in the possum family, known as sugar gliders, that feast on nectar and glide like flying squirrels.

"Besides living in filth, besides living in dirty water, there is a lack of wholesome, fresh sanitary, healthy air," said Gary Rogers with the Nassau County SPCA. "The odor was horrible, they were living in conditions that were totally unwarranted."

Four people living in the home -- two adults and their two adult children -- are under investigation, CBS New York reported.

"People make choices where to live, these animals had no choice," Rogers said.

Investigators said the homeowner Gary Gruber claims to rehab the animals, but kept them in cramped and filthy conditions.

"They are going to be issued violations for possession of illegal animals and reptiles," Rogers said.

Rogers said Gruber's home had been raided before, last August, when an alligator was rescued from a tub. He was given a warning, told to fix the problem, and relocate the animals.

Inspectors said he didn't comply, and the situation got worse.

No one answered the door for a CBS New York, but neighbors said Gruber keeps to himself. They were more worried about the animals.

"Hopefully they put them somewhere where they are all safe and good," Kephart said.

"Every animal that was taken out of here today is going out of state, going to places that deal with animals that were put in these kinds of environments," Rogers added.

After the raid -- silence. The constant chorus of bird sounds coming from the house was gone.