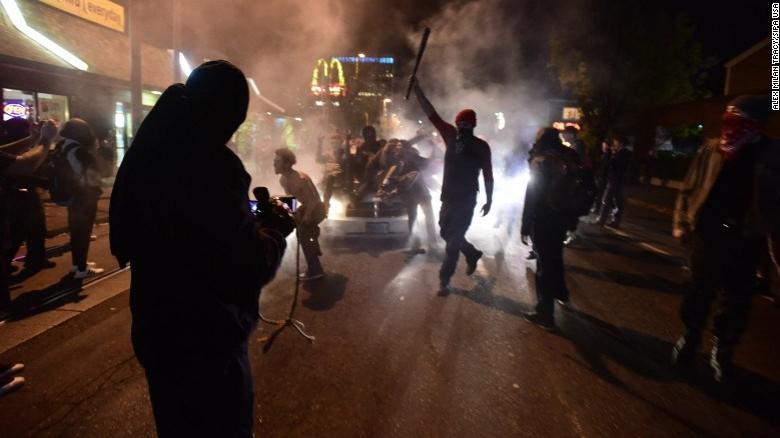 (CNN) Thousands protesting Donald Trump's victory in the presidential election took to the streets for a third night of demonstrations and vigils in several US cities.

An anti-Trump rally in Portland, Oregon, revved up as protesters confronted police Thursday night. What started out as a peaceful march, with more than 4,000 people, quickly turned violent.

Over the course of the evening, "anarchists" in the crowd threw objects at officers, vandalized local businesses and damaged cars, Portland Police Sgt. Pete Simpson said.

Police publicly declared a "riot" due to "extensive criminal and dangerous behavior" and called the protest "unlawful," according to posts on the department's Twitter page.

The crowd was dispersed using "less lethal munitions" and at least 26 protesters were arrested, police said.

Protests and marches continued in other US cities including Los Angeles, Philadelphia, Denver, Minneapolis, Baltimore, Dallas and Oakland, California.

The mood in the streets where protesters marched was as varied as the locations.

Eleven people were arrested in Oakland, including someone who had seven Molotov cocktails in his possession, police said. Some of those arrested are accused of assaulting police officers.

In Los Angeles, about 185 protesters were arrested Thursday night into Friday morning, police Officer Norma Eisenman said -- including some on suspicion of blocking roads, and minors accused of violating curfew.

People gathered outside Los Angeles' City Hall chanting "not my president." As in Oakland, there were reports of people throwing rocks and bottles at police officers and vandalizing police cars with graffiti, CNN affiliate ABC reported. At least one person was held on suspicion of assaulting an officer, Eisenman said.

Many demonstrations were peaceful, if not tense and somber.

In Philadelphia, protester Deb Bentzel said that "as a woman and someone who believes all people, regardless of their race, religion or citizenship status should be supported and embraced by this country," she marched to reject "the racism, hate, misogyny and fear that this man (Trump) projects and fosters in others."

In Minneapolis, protester Lauren Peck shared similar sentiments as she gathered with others at the Humphrey School of Public Affairs, named for the late US senator and Vice President Hubert Humphrey, at the University of Minnesota.

"I feel it's important to voice that I have serious concerns about this President-elect and the racism, sexism, xenophobia and so much more that does not represent me or so many in my life. The mood here is peaceful, positive and energetic," Peck said.

Trump tweeted that the demonstrations that began hours after polls closed Tuesday night were "very unfair."

Trump's presidency 'needs to be opposed'

"I was very proud of the fact that so many people came out because his presidency needs to be opposed right now," Moore told Don Lemon on "CNN Tonight" Thursday.

"Literally thousands of people coming down the street and I just joined them," Moore said. "There's a lot of fear and a lot of panic amongst a lot of people right now."