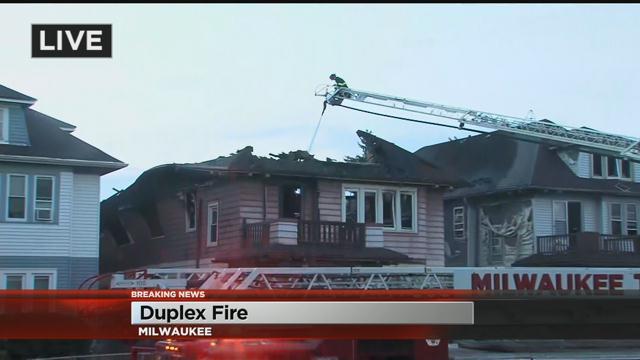 Firefighters responded just after 4 this morning near N. 50th Street and Clarke.

The roof of one house completely collapsed.

“The back part of the building was collapsed, when we arrived it was fully involved, all floors. Complete damage on that building. The exposure building where we removed the occupants from it does have significant damage but it won't be a total loss,” said Deputy Chief Terry Lintonen of the Milwaukee Fire Dept.

We are told the more severely damaged house was vacant when the fire started.

The flames also damaged the home next door. Six people were sleeping inside, but managed to get out safely.

One of the occupants says the home has a lot of water damage because the windows were open, but she feels blessed because it could have been much worse.

The Red Cross was on scene to help.

Firefighters are curious what caused the fire, as the vacant home had no gas service or electricity. The cause of the fire is under investigation.