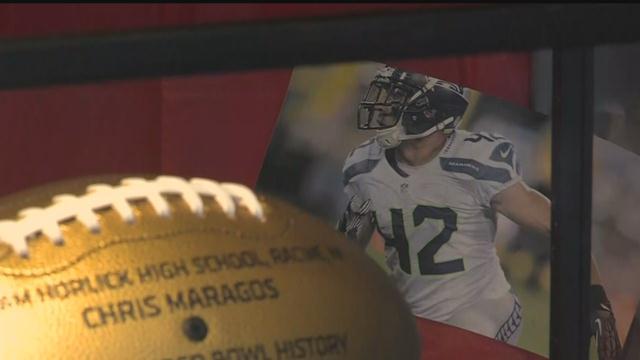 Most high schools have trophy cases.  But few schools have a golden football from the NFL, like they do at Racine's Horlick High School.

"Makes you feel good and sense of pride and I think it's a good thing for our school right now, we need some positive stuff.

Teacher and Coach Steven Zahn is talking about the "Golden Football" awarded to Horlick High in honor of Chris Maragos.

He is an alum who went on to play for the Wisconsin badgers and then to the NFL.

The golden football is given to schools whose athletes have participated in one of the fifty Super Bowls.

Maragos did with the Seattle Seahawks two years ago.

Chris Maragos played this past season with the Philadelphia Eagles, but no matter where he goes he can always come back to Racine and see his name right next to that golden football.