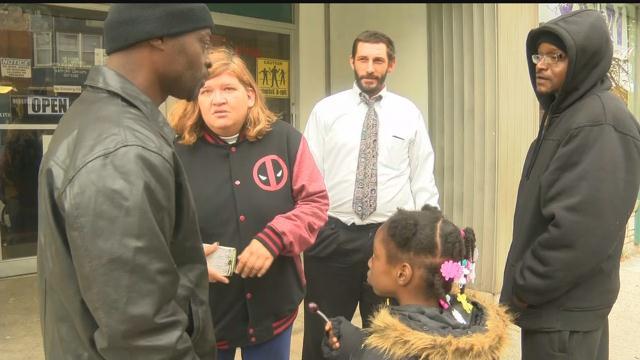 A community is rallying behind a homeless man after he pulled off some heroics.

It was the quick thinking of a homeless man that helped save a little girl from a burning building.

Brian Dail said he didn't think twice about running inside the apartment building on 61st Street near 22nd Avenue to save a 5-year-old on Sunday night.

"I went outside with no shoes, no shirt, no nothing. I seen a fire and all I heard was a kid was inside and I just ran in,” said Dail.

The fire department said the fire was confined to the attic, but because of the age of the building it was difficult for firefighters to get to it.

The community has started a GoFundMe page for Dail, who fell on hard times.

He said he surprised and grateful for the community support.

"I got eight kids myself, and if my apartment was like that, I would want someone to come in my apartment and save my kids as well,” said Dail.

Reginald Pritchett said his daughter’s eyes were bloody red and she could barely breathe when Dail carried her outside.

Reginald said he is grateful Dail was able to rescue his little girl.

"Super blessed. I was terrified. Once I found out he had went up there and got her, the next day when I went to see him, I hugged the man so tight, it was like we was conjoined twins,” said Reginald.

Dail tells CBS 58 shortly after becoming homeless, his kids were taken away by the state. He hopes to use the money raised to get a new place so he can get his kids back. The Pritchetts lost everything in the fire, and right now they're staying with family. The community is planning a fundraiser next month to help them get back on their feet.