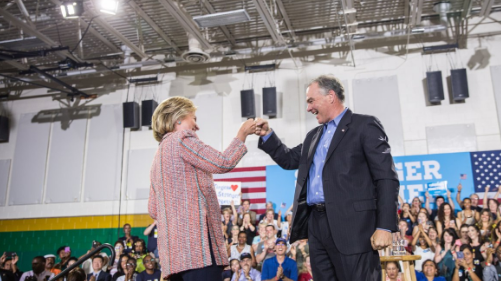 (CNN) Hillary Clinton has chosen Virginia Sen. Tim Kaine to be her running mate, turning to a steady and seasoned hand in government to fill out the Democratic ticket, she announced Friday.

"I'm thrilled to announce my running mate, @TimKaine, a man who's devoted his life to fighting for others. -H," she tweeted.

Minutes later, Kaine tweeted: "Just got off the phone with Hillary. I'm honored to be her running mate. Can't wait to hit the trail tomorrow in Miami!"

She will introduce her new partner at a campaign rally Saturday in Miami, a recognition of Florida's pivotal importance in the fall. It's also a chance for Kaine, a fluent Spanish speaker, to introduce Clinton to Latino voters, a critical slice of the electorate in her quest to defeat Donald Trump.

Clinton is hoping to seize the spotlight from Republicans after their convention in Cleveland. The site of Kaine's first joint appearance with Clinton is Florida International University, where the student body is more than half Hispanic.

The announcement came on the heels of an attack in Munich, Germany, that dominated the afternoon news cycle. The Clinton campaign deliberated over how to avoid a split-screen scenario that could be perceived as insensitive, but in the end, proceeded with its plan to make the unveil on Friday.

Clinton's decision to choose Kaine began when John Podesta brought the candidate two-dozen binders to her home in Chappaqua, New York, in April, according to a campaign aide. Last week, Clinton and Kaine spent 90 minutes together, followed by another meeting on Saturday that brought together the two families, including Clinton's husband, daughter and son-in-law, as well as Kaine's wife.

Ultimately, Clinton was swayed by her personal comfort with Kaine, as well as the belief that the senator is fully prepared to do the job. On Friday, Clinton called Kaine around 7:30 p.m., then spoke with President Barack Obama.

It may be an anti-establishment year, but Clinton's running mate is an insider: A senator and former governor from the critical battleground of Virginia and a former chairman of the Democratic National Committee.

Kaine, 58, has long been seen as a seasoned and safe choice for Clinton, who could help shore up support among white working-class voters.

Her selection ended a long search that was conducted almost entirely in secret, a stark contrast to Trump's vice presidential search. It reflected a strategic choice by Clinton: To go with a running mate who amplifies her argument that experience in government -- not sizzle -- is the best path to keeping the White House in Democratic hands.

Kaine's midwestern roots also run strong: Born in Minnesota, Kaine is the son of a welder who was raised in Kansas and graduated from the University of Missouri. He went to Harvard law school, but before graduating served a year as a missionary in Honduras.

Clinton camp was ready to pounce on Trump's VP rollout

It was an experience that cemented his Catholic faith and strengthened his fluency in Spanish. Kaine was the first member to give an entire speech on the Senate floor in Spanish. It was during a debate in support of the bipartisan "Gang of 8" immigration reform package.

At a joint campaign appearance last week in Virginia, which served as a final audition, Clinton stood side-by-side Kaine and beamed as he spoke of her virtues in Spanish.

The Clinton campaign selected Kaine over a roster of at least three other senators and two Cabinet secretaries to Obama. Advisers to Clinton see Kaine as a stable force on the bottom of the ticket, foregoing the allure of a pick that could provide more star power in favor of one they are hoping will be void of drama.

"We all know we need a bridge builder, not a trash talker," Kaine said last week as he introduced Clinton at the Virginia rally.

His resume is far more fulsome than when he was vetted as a potential running mate for Obama in 2008.

With nearly three years of experience in the Senate under his belt, Kaine has beefed up his foreign policy credentials. He serves on both the Senate Foreign Relations and Armed Services Committees, emerging as a leading proponent of pushing the administration to consult with Congress before engaging in military action.

Kaine is well known inside the Democratic Party, serving as its national chairman during the first years of the Obama administration. He jumped onto the Clinton campaign early -- the second time around -- announcing his support in 2014, a year before her announcement.

His bipartisan roots, the Clinton campaign believes, could resonate with voters seeking an alternative to Trump.

At Harvard, he met Anne Holton, the daughter of former Virginia Gov. Linwood Holton, a Republican. Kaine and Holton married and settled in Richmond where both practiced law and sewed the seeds of Kaine's political future.

After 10 years working as a civil rights lawyer and lecturer at the University of Richmond's law school, Kaine mounted a successful campaign for city council from Richmond's Northside. His political rise continued to the mayor's office and a successful bid for lieutenant governor before being elected governor in 2005.

His governorship was a study in practical decision-making and political maneuvering -- qualities valued by the Clinton organization. He pushed through measures like an indoor smoking ban -- popular with voters, but controversial in a state with a once robust tobacco industry. Virginia was the first state in the south to enact a ban of this nature.

Kaine also earned high marks for his stewardship of the state after the Virginia Tech Massacre, at the time the worst mass shooting in U.S. history. In the wake of the Tech massacre, Kaine became a leading voice on reforming gun control laws, an issue Clinton has highlighted throughout her campaign.

Early during his time as governor, Kaine took one his biggest political risks: offering a hearty endorsement to then-Sen. Barack Obama in his 2008 presidential bid.

At the time Obama was the underdog to Hillary Clinton and Kaine was the first sitting governor to endorse his campaign. Obama returned the favor by naming Kaine one of his national co-chairs and after securing the Democratic nomination, he put Kaine on a short list as a potential running mate.

Kaine was vetted by the Obama team, but in the end Obama chose Sen. Joe Biden of Delaware -- someone with a deeper foreign policy resume, an issue at the time that was considered a weak spot for Obama.

While Kaine is perceived as far more of political moderate, particularly with today's liberal strain coursing through the party, he is often a reliable liberal vote in the Senate.

Despite his Catholic faith, he is a staunch supporter of abortion rights. He is a defender of the Affordable Care Act and announced his support for same sex marriage in 2013. On guns he has an "F" rating from the National Rifle Association (NRA). By comparison, until the Sandy Hook Massacre of 2012, his counterpart Warner had an "A" rating from the NRA.

Today 36° Snow in the morning