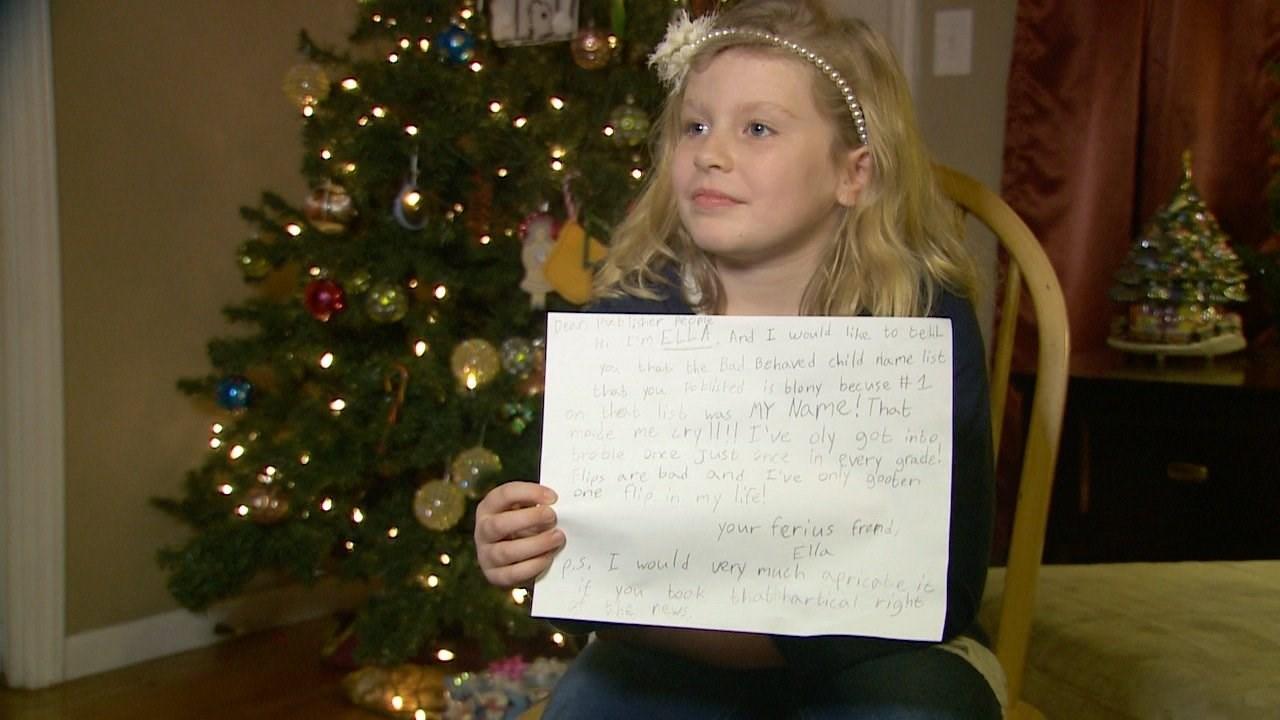 Grand Rapids, MI (WXMI) -- Ella Christie is pretty adamant that she has never received coal in her Christmas stocking and, for that matter, she has only gotten in trouble \"just once\" in school.

So, you can imagine how 7-year-old Ella felt when she found out from her mother that her name is ranked No. 1 on a Huffington Post Top 20 list of 'Names that most often appear on the naughty list.'

\"I did not like seeing that,\" she said, pointing out her name wasn't just on the list but at the \"very tippy top\" of the list.

Ella said she cried—hard—upon learning the news, and she was not about to let her name get a bad rap.

\"I kind of thought that everyone would see that, like my friends would, and think I was naughty and not be my friend\" she said.

So, in a strongly worded letter addressed to those \"publisher people,\" Ella set out to set the record straight to Huffington Post:

Hi, I'm Ella and I would like to tell you that the Bad Behaved child name list that you poblished is blony because #1 on that list was MY NAME! That made me cry!!! I've oly got into trouble once Just once in every grade! Flips are bad and I've only gotten one flip in my life!

P.S. I would very much apricate it if you took that article right of the news.

According to Brett Christie, Ella's dad, he suggested she write the letter but didn't push it. He was surprised she went ahead with it.

\"I wasn't sure, we didn't talk about it much and she didn't respond to it much, other than she ran off and wrote it,\" he said.

Mary Christie, Ella's mom, said the situation was a perfect opportunity to teach Ella about how to deal with situations she might not agree with.

\"I explained to her, 'You know a lot of these things, they're just lists and nothing factually based on her personality,' and I thought it'd be a good chance to talk to her about how to brush things off her shoulder,\" she said.

\"Ella, she is pretty outspoken often and pretty verbal and good about expressing her feelings, but to the extent she took it, yes, I was surprised.\"

Ella says she is still waiting to hear back from those \"publisher people,\" adding she never expected to get the attention she's now receiving.

\"I haven't heard anything back,\" Ella said. \"They didn't really seem to care that I didn't like it.\"

The original Huffington Post article compiled names from an education rewards program known as \"School Stickers,\" which grabbed data from nearly 60,000 students in roughly 10,000 schools across the country that use the program.