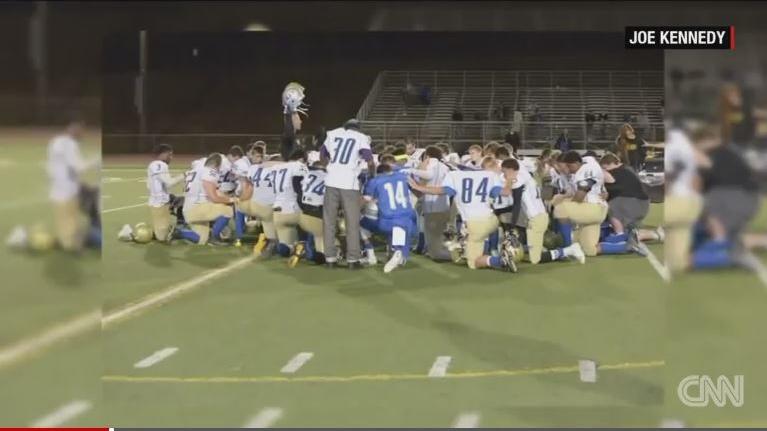 (CNN) As Joe Kennedy knelt to pray at the 50-yard-line Friday night he felt a presence around him.

The assistant football coach at Bremerton High School in Washington state was being joined by some of his opponents and fans -- some of whom had come to the game to pray with him.

After the Knights' homecoming loss to the Centralia Tigers, Kennedy walked to the middle of the football field, hoping to say his usual thanks to God by himself.

He had been told not to do it. The Bremerton School District had said if he prayed while on duty as a coach he would be violating federal law.

Kennedy, as he has done after most games for seven years, prayed anyway, defying the order. He opened his eyes to find a huge crowd of supporters around him.

It was overpowering. The coach cried as he spoke to reporters.

"I've got my eyes closed and I feel all these people around me. I'm like, God, I hope those aren't kids," Kennedy told CNN affiliate KIRO of Seattle and other media outlets. "I'm sitting there and I'm going, 'God, thank you for this opportunity. And ... if this is the last time I step on the field with these guys ..."

CNN called the school district on Saturday but didn't receive an immediate reply.

According to the Seattle Times, Kennedy, 46, has never asked anyone else to participate in the postgame prayer. And at first, it went largely unnoticed but players began to join him. One of them is a Bremerton captain. He's agnostic.

"It's about unity. We can be mad at each other all we want during a game and get upset, but once the game is over, that all goes away," Ethan Hacker told the Times. "What (Kennedy) does brings us all together no matter how much we despise each other."

The school district sees it as a potential violation of law, based on the separation of church and state.

"The district is in no way taking away an athletic coach's freedom of expression," Superintendent Aaron Leavell said in a statement posted to the organization's website. "What we are doing is what every state-funded agency and school district must do: abide by the laws that govern us."

Leavell didn't say what the possible punishment could be for Kennedy -- whose legal team notified the school district before the game he was going to pray -- might be.

The Liberty Institute, a religious freedom legal organization based in Texas, said in a letter this week to the school district that Kennedy is within his rights to pray once a game has ended.

"Accordingly, the First Amendment forbids religious activity that is sponsored by the government but protects religious activity that is initiated by individuals acting privately, as is the case with Coach Kennedy," deputy chief counsel Hiram Sasser wrote. He adds later, "No reasonable observer could conclude that a football coach who waits until the game is over and the players have left the field and then walks to midfield to say a short, private, personal prayer is speaking on behalf of the state."

The prayer, according to the Seattle Times, is a version of the following sentiment: "Lord, I thank you for these kids and the blessing you've given me with them. We believe in the game, we believe in competition and we can come into it as rivals and leave as brothers."

The district said in a September letter to the coach that he would still be permitted to speak to members of both teams after games, so long as the talk didn't include religious expressions, including prayer.

For several games, Kennedy abided by the directive. This week, he decided he had to do what he believed was right.

Now Kennedy waits to see what the school district will do.

"Whatever happens happens, you know," he said, according to the Bremerton Patriot newspaper. "But I'm going to be bold in my faith and I'm going to fight the good fight and I want to set that example for every one of the kids if you believe in something.