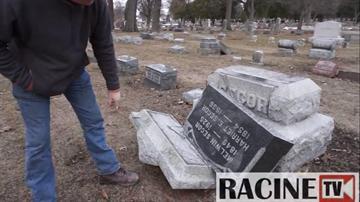 RACINE (WDJT) -- About two-dozen headstones were vandalized at Mound Cemetery in Racine.  It happened sometime between Saturday, March 22 and Monday, March 24.

Steve Bedard, supervisor at Mound Cemetery, calls toppling headstones a senseless act of vandalism.  \"That is somebody's mother or father under there,\" Bedard said, \"it's part of our history, and it should be respected.\"

Bedard says he has begun to try to notify the families that were victimized, but because of the age of some of these headstones, tracking down some the families will be impossible.  Since some of the vandalized headstones had been constructed in the late 1800's, they will be difficult to repair.  In some cases, equipment will have to be brought in to lift the 3-thousand pound headstones and return them to their rightful place.

Racine Police suspect that a small group of kids or young adults were the culprits, and they are asking the public for help.  There is a reward for information leading to an arrest.