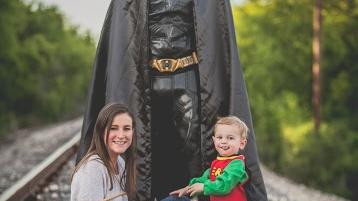 A Hartford family said that after being praised for a superhero-themed photo shoot with their baby, they are now the target of internet attacks.

People were upset over the fact that the photos took place on train tracks.

Roxanne Daly set up the caped crusader photo shoot for her husband Mike, a massive Batman fan, as a Father's Day gift.

Mike was dressed as the Dark Knight, his son Finn as the boy wonder Robin, and Roxanne as the damsel in distress.

The couple posted the pics online and said they were an immediate hit with friends and family.

Within hours it went viral, the pictures got picked up by a number of publications like Buzzfeed and the Daily Mail.

With all the attention came criticism, people were saying the Dalys were putting themselves and their baby in harms way and promoting illegal activity.

They added that's when it began to spiral out of control.

Mike explained that some people posted their home address online and were threatening to come to the house at night.

Wisconsin State law says that only rail road workers and \"authorized newspaper reporters\" are allowed to walk along or on the train tracks.

The Daly family said they had no idea about that and never thought it would come to this.

The Dalys said they made police aware of the photos and threats, but authorities are not taking action on either right now.

The Dalys are also keeping the pictures and planning to hang them up soon, but add there wont be any more photo shoots on the tracks.