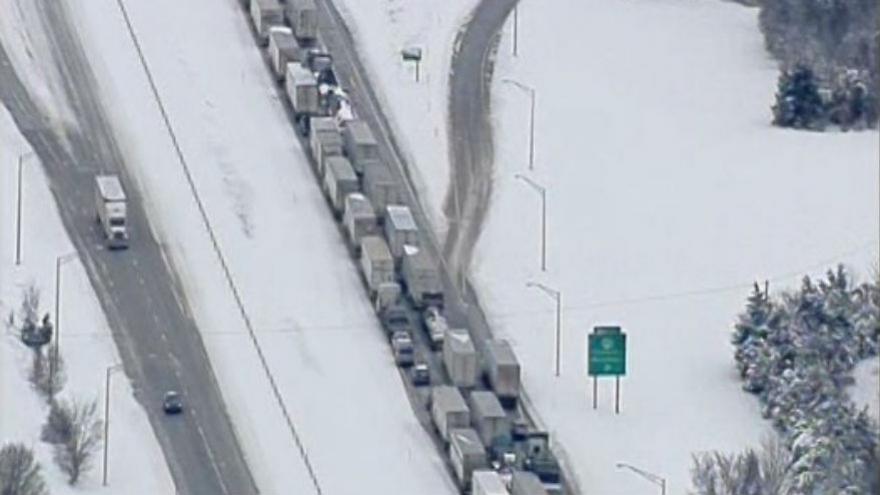 Florida residents Patrick and Sue Ellen Kilgallon knew the storm was coming. They tried to get out of northern Kentucky on Wednesday night. Instead, they got stuck in the snow on Interstate 65.

The couple and their two dogs were still there Thursday morning, more than 14 hours later.

They were among hundreds of motorists stranded on I-65 near Elizabethtown, Kentucky, and on Interstate 24 near Paducah after a storm so intense, road crews just couldn't keep up.

Gov. Steve Beshear said Thursday afternoon that some traffic had begun to inch along.

\"We have finally cleared some emergency lanes on the sides of the roads, and the traffic now northbound on I-65 is beginning to move slowly and to clear out,\" he told CNN. \"It will take several hours to clear it out, because it's backed up so much. But it is moving again, thank goodness.\"

The Kentucky National Guard was on the scene on both interstates, rescuing motorists and taking them to nearby warming centers, Lt. Col. Kirk Hilbrecht told CNN.

\"Hang tight, we are coming,\" he assured motorists.

Beshear told CNN that officials had been prepared.

\"We did everything we could in advance,\" he said.

There were no reports of any deaths or major injuries, the governor said.

A morning weather report indicated that over a 15-hour span, 21 inches of snow had fallen on Elizabethtown, about 50 miles south of Louisville. Other parts of Kentucky, along with parts of Ohio to the north and Tennessee to the south, had more than a foot of snow.

Although the snow had stopped, state police reported the interstates and many local roads remained impassable.

The Kentucky Transportation Cabinet published a hotline number for motorists stranded on the highway.

The Kilgallons gassed up Wednesday night and tried to beat the storm as they traveled south for Florida.

A traffic camera at milepost 107 on I-65 between Louisville and Elizabethtown shows tightly packed southbound traffic and mostly empty northbound lanes.

Kilgallon has a scanner in the car and said she has heard that a tractor-trailer collided with several cars, and while the truck was moved, there were not enough tow trucks to move the other vehicles involved in the accident.

The Kilgallons had a few snacks left and are rationing the water they have left, Patrick Kilgallon said Thursday afternoon. They ran the engine on their new Jeep all night to keep warm and prevent the ice from encrusting the car too deeply, he said.

They can't do anything but wait now.

Asked if she was upset with Kentucky officials, Sue Ellen Kilgallon said no.