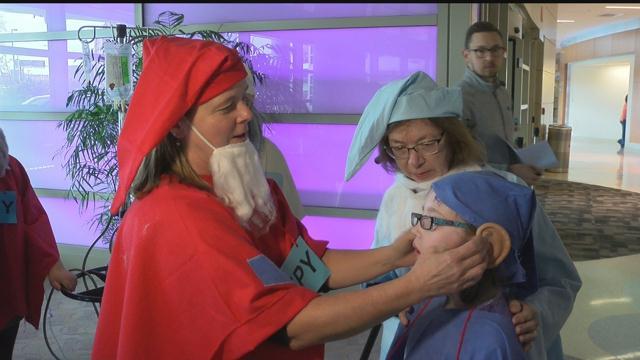 Halloween is for kids and at Children's Hospital those who take care of them.

About the closest you'll see to anybody looking like a doctor is if they fit into a fairy tale somewhere.

Each individual department striking a pose in hopes of claiming first prize in a hospital costume contest.

Ever present, the reminders of the medical challenges these tiniest of patients face.

Some having to work up a lot of strength just to take part.

Others, whose smile was the kind of medicine mom never anticipated and an example of how the career of medicine really is a vocation.

"It just shows that their job is what it is,"commented mother Tangela Gransberry." They really did a good job for the kids. Nice and creative."

No coaxing needed to get young Payson ready for his close up.

In his own brave battle against illness, he believes in  the super hero strength of laughter.

The stuff that dreams are made of.

"It's awesome!" declared Payson who dressed up as Batman. He met with Robin but was most excited to see Peter Pan.

"I never thought I would in my life!"

The interview were featured in "Our Stories" on the CBS 58 News at 4, a regular segment that devotes extra time to good works in the community to give us all a complete perspective of the place we call home.