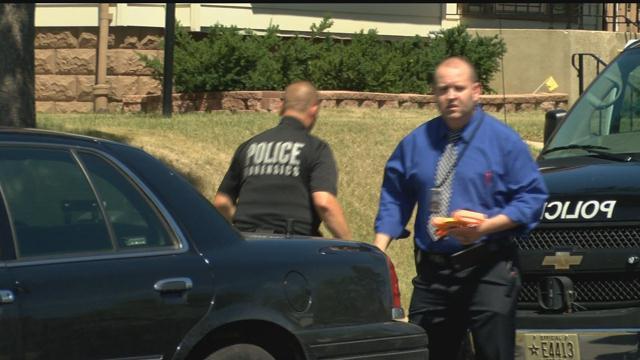 The gun used to wound Officer Brandon Baranowski was purchased back in 2014 at the Shooter's Shop in West Allis and then given to a man who could no legally buy a firearm, according to newly released court documents.

Investigators say Emanuel Romo made the original purchase and then gave the gun to his cousin, Alonso Sandoval, who would not have been able to legally purchase a firearm because he had been charged with a felony.

Sandoval then claims to have sold the gun to a co-worker named "Andres." Police have yet to locate the man.

Investigators are still trying to figure out how it wound up in the hands of Tomas Uriegas last Sunday who used it to wound the police officer during a domestic violence call before then using it to fatally shoot himself.

The court documents are clear that it is the Ruger SR-22 purchased by Romo is the same gun used to wound the officer.

Baranowski was sitting in his squad car and took multiple hits to the arm and chest.

Tracing the origin of the gun is important to MPD, given its history of officers wounded by guns in the hands of people who should not have had firearms.

The mother of the shooter says addressing mental illness is a critical part of the equation.

In an exclusive interview with CBS 58 News, Mildred Rivera says depression brought her son to the brink.

"Ii just want people to know he wasn't this horrible person. He wasn't," Rivera told CBS 58's Amanda Porterfield.  "He though he had no options. He thought that was the best way for him to go.  He felt alone. He felt like no one must have loved him. Even though that wasn't true.  He had a lot of people who did love him."

Rivera has issued a public apology to the officer and his family.

Officer Baranowski surprised many when he walked out of the hospital following surgery just days later.

In a statement to CBS 58 News on Friday, Chief Flynn brought it all back to gun control and enforcement.

"My hope is that serious federal charges will result in actual justice and deter others who attempt to arm criminals."

The original purchased of the gun, Romo, is scheduled to be in court next week.

He's charged with making false statement to a firearms dealer and providing a firearm to a person who is under indictment for a felony.

The cousin is charged with aiding and abetting Romo in giving false statements.