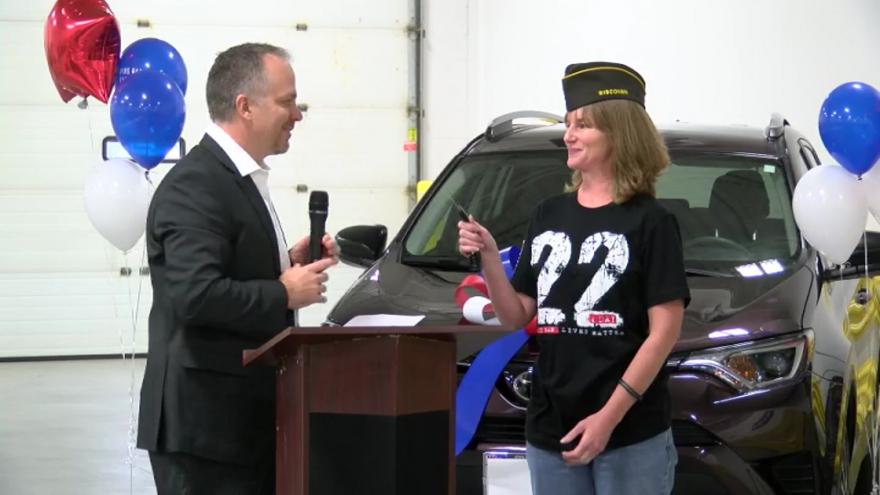 MILWAUKEE (CBS 58) – A Greenfield veteran was given a refurbished car Thursday morning through a program by Progressive Insurance.

Amber Frymark served in the Air Force for ten years including two tours of duty overseas. Frymark says she eventually left the Air Force due to the accumulation of invisible wounds.

After being nominated by her local VFW, Frymark filled out an application for the Progressive “Keys to Progress” campaign. The program partners with other companies to refurbish vehicles and award them to veterans in need.

Frymark said when she learned she won, she was shocked.

“Progressive Insurance called me on my cell phone one day and says we’d like to congratulate you, you are the recipient of our car this year,” Frymark said. “I almost thought it was a fake phone call.”

At Thursday’s presentation Frymark was not only given the car but told insurance would be paid for by Enterprise. Additionally, Progressive Insurance and other local businesses presented Frymark with $6,500 in cash and gift cards to thank her for her service.

Since being out of the military, Frymark started a business and says the new car will help her continue to grow the company.

“This car represents not just the business that I’ve grown and I need it to get from Point A to Point B,” she said. “But I want to stand here as well to represent the veterans who are not here, who never had a dream, who never had a chance to have a dream and who could never put keys to a vehicle in their hand like I am today,” she said.

To hear more from Frymark and Thursday’s event, click the video below.