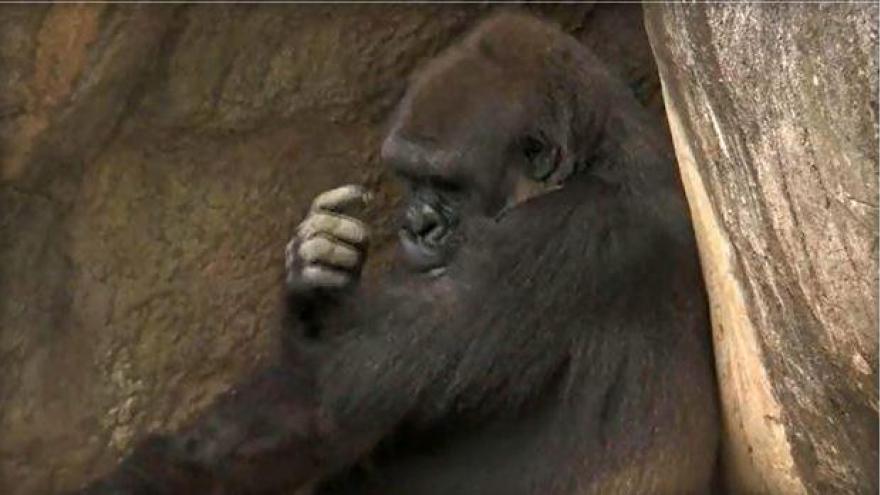 (CBSNews) A woman was rushed to a hospital over the weekend after what officials at a New Orleans zoo are calling a “freak incident” involving one of their large female gorillas.

Officials at the Audubon Zoo in New Orleans say they are investigating after a gorilla named “Praline” hurled a block of wood at spectators Sunday afternoon, striking a pregnant woman in the head as she attempted to flee.

“Everybody started scattering, like running, so I tried to cover my face, then as I was turning around, the thing just hit my head,” 34-year-old Sylvia Cressy told CBS affiliate WWL. “The stick, the wood put a lump on my head.”

Cressy, who is six months pregnant, said she immediately fell to the ground after she was struck by the object.

“When it hit me, I kind of blanked out,” Cressy said. “It really took the wind out of me and I fell on my belly. As I regained consciousness, I was just worried about my baby.”

In a statement Tuesday, zoo officials said the block of wood was an “enrichment tool,” filled with honey and raisins for the group of three gorillas who share an enclosure at the zoo.

“Our animals receive enrichment tools daily,” the Audubon Zoo said in a Facebook post. “Enrichment at AZA-accredited zoos across the country typically includes new food items, objects to manipulate, and activities designed to provide our animals with opportunities to express natural, species-appropriate behaviors, whether it be foraging, exploring, playing, or other activities.”

The zoo called the incident “concerning” and said it will work to address any issues in order to prevent something like this from happening in the future.

Cressy spent six hours in two different hospitals with doctors checking both her and her baby’s conditions following Sunday’s incident. She told WWL she wasn’t happy with the level of medical attention she received at the zoo.

“They did a report, they did my vitals, they didn’t offer to take me to the hospital or anything, they just told me where the nearest hospital was,” Cressy said.

But the zoo said first responders attended to Cressy to provide care for her minutes after she was injured.

“The safety of our guests and employees is of utmost concern,” the zoo said.

The zoo said it has removed the wooden blocks from the gorilla enclosure as it continues its investigation and will continue to work with Cressy to make sure she gets the medical care she needs as she recovers from her injuries.

“I’m still kind of shaken up,” Cressy said. “I’m still experiencing pain in the back of my neck, where the lump is.”