Golfers finish round as wildfire rages behind them 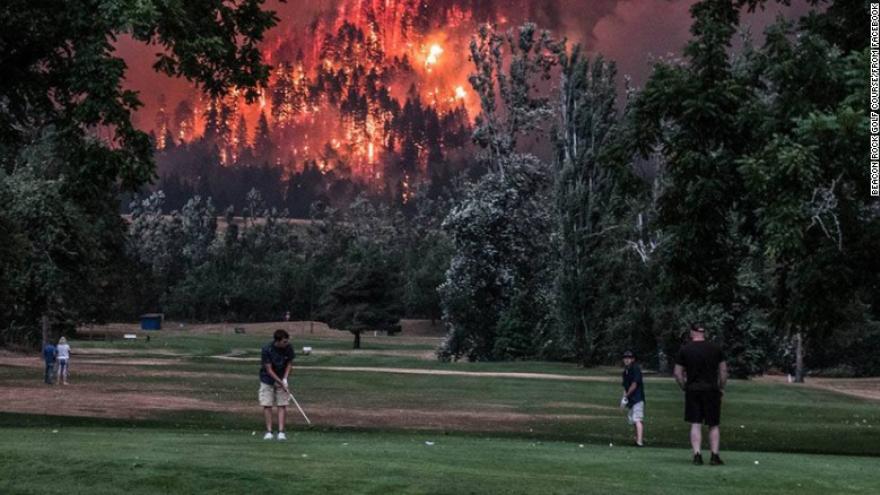 (CNN) Everybody knows golfers just hate to stop a good round.

So, when the Eagle Creek fire, a 31,000-acre blaze burning near Portland, Oregon, encroached on the nearby Beacon Rock Golf Course, things didn't exactly grind to a halt.

Staff at the golf course -- located in Washington state, just across the Columbia River from the fire -- posted pictures on Wednesday to Facebook of golfers carrying on as the massive wildfire raged through trees on a nearby hillside.

"Our golfers are committed to finishing the round!" read one post, which features three golfers pushing ahead with their game as two other people on the course look at the fire.

As it heralded its golfers, Beacon Rock also took stock of the gravity of the situation. In another post, showing a view of the course and the fire from the clubhouse, the staff said it's "thinking of how many people will be affected" by the blaze, which has forced hundreds of residents to evacuate.

Taken Monday evening, the photos' and captions' apparent lack of panic owes to the fact that the Columbia River provides a buffer between the fire and the golf course, Mark Mayfield, Beacon Rock's operations manager, told CNN.

"The fire was a mile and a half away," he said.

Local reaction to the fire photos has been a mix of wonder and confusion, he said.

"Some people said, 'Wow, it's awesome,' while others wondered, 'How could they keep playing golf?'" Mayfield said.

By Thursday, no one was playing the course because of all the smoke from the fires, though Beacon Rock's restaurant was still open, he said.

Fire not yet contained

The fast-moving fire, which started Saturday and merged with the nearby Indian Creek fire, has not been contained, Oregon Gov. Kate Brown said.

It's burning east of Portland, at the Columbia River Gorge National Scenic Area, according to an online update by the National Wildfire Coordinating Group.

Oregon State Police say a teenager from Vancouver, Washington, is believed to have started the fire while he and some friends may have been using fireworks. The 15-year-old hasn't been arrested or publicly identified, state police said.

The golf course photos are reminiscent of the photo out of Canada that went viral earlier this summer of a man cutting his grass while a tornado churned away in the background.