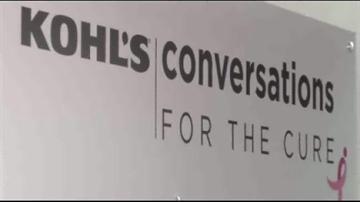 MILWAUKEE-- Amberlea Childs is on a mission.

\"You can get breast cancer,\" she said. \"Whether you're a man or woman and we need to keep talking about this.\"

Enter in Kohl's Conversations for the Cure.

It's a free program for women to talk openly about breast cancer before it's too late.

\"I had breast cancer in my family, but i didn't know that until I went back to my family to say I was diagnosed with breast cancer,\" continued Childs. \"That's a dynamic i want to change.\"

But the ultimate goal is encouraging women to get regular screenings.

That's done through conversations, or group sessions, in Southeastern Wisconsin.

Childs and her team of volunteer leaders make sure women know their risks and what's normal for them.

\"It doesn't have to be a heavy conversation,\" said Linnea Harrington, volunteer leader. \"It can be light and fun.\"

\"They're [volunteer leaders] doing it because they want to make an impact in their community and they want to save people's lives,\" said Childs.

\"Had I been a part of a Conversation for the Cure, I might have been diagnosed a year earlier and caught it before it got to stage four,\" continued Harrington.

The volunteer leader was 34 years old at the time.

One year later, she's living proof breast cancer has no age restrictions and is passionate to teach others about early detection.

Harrington said, \"After age 20 every woman should be getting a breast exam, a healthy breast exam.\"

She says Child's leadership for change is inspiring.

But Child's calls it paying forward the love and support she was shown to stand tall as a survivor.

\"Helping empower not only individuals, but as a cit,y that I see people wanting to be healthier to get out and live life,\" said Childs.

More than 8,000 women have been educated through Kohl's Conversations for the Cure in nearly five years.

To get involved and find a conversation near you, visit the website.