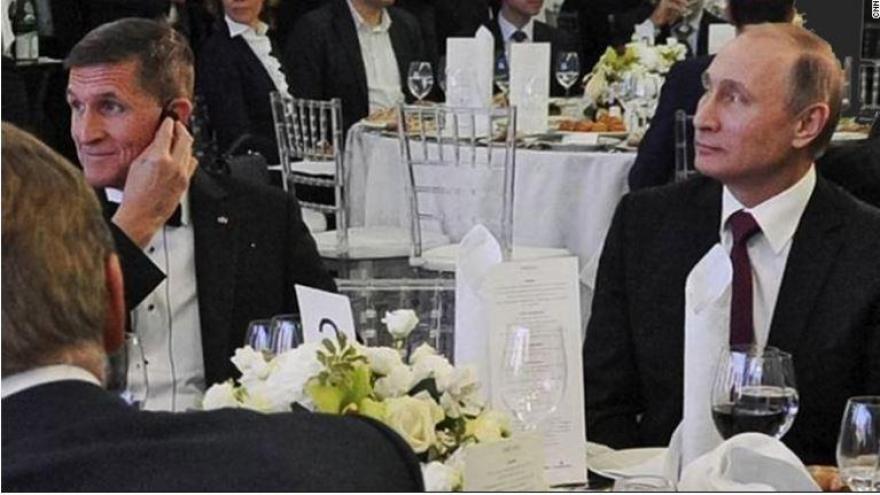 The US intelligence community has long assessed RT to be a propaganda tool of the Kremlin, writing in its January report on Russian interference in the US election that the organization had participated in disinformation campaigns aimed at the US.

Flynn had previously acknowledged the speaking engagement, telling multiple news outlets in July and August that he received money for the speech. But he declined to state the amount, saying that the source of the funds was his US speakers bureau, not the Russian broadcaster, which US intelligence agencies describe as an instrument of the Russian government.

"I didn't take any money from Russia," Flynn told Yahoo News in July.

Rep. Elijah Cummings, the ranking Democrat on the House Oversight Committee, sent a letter Thursday questioning whether Flynn reported the payment as required by both law and military regulations. In addition, receiving money from a foreign government without approval from his relevant branch of service violates military regulations.

Documents obtained by the oversight committee and shared with CNN show that RT, formerly known as Russia Today, specifically earmarked Flynn's compensation as part of the payment package to the speakers bureau, Leading Authorities Inc., which also included the bureau's fee and visa expenses.

In an email exchange between RT and the speakers bureau that the House committee acquired and was reviewed by CNN, a representative from RT said that the initial asking price for Flynn's appearance as "a bit too high" and asked the company to reduce the fee.

The committee also obtained a purported copy of the check the speakers bureau provided Flynn.

The House Oversight Committee also acquired an email dated November 13, 2015, from an official of RT TV-Russia stating, "We will be covering the payment of General Flynn's fee from our London office."

Price Floyd, a spokesman for Flynn, told CNN that "Gen. Flynn reported the trip to the DIA both before he went to Russia and after he returned."

As the former director of the Defense Intelligence Agency, Flynn was obligated to inform the agency of the trip. The payment, however, would have needed to be reported to a different part of the Pentagon.

Asked if Flynn reported the payment, Floyd had no comment.

Cummings wrote a letter addressed to Trump, Secretary of Defense James Mattis and FBI Director James Comey highlighting the payment documentation and questioning whether Flynn appropriately revealed the financial arrangements when he completed his form SF-86, an official document required by anyone seeking a security clearance for a position in government.

In the letter, Cummings accused Flynn of violating the emoluments clause as it pertains to military regulations that prohibit retired military officers from receiving payments from a foreign government.

According to regulations, Flynn would have had to have sought approval from the Army to receive such payment, something the Army has no record of.

Flynn was forced to resign as Trump's national security adviser after reports emerged that he had mischaracterized his communications with the Russian ambassador to the US to Vice President Mike Pence.

Last week, Flynn registered as a foreign agent with the Justice Department, acknowledging that the work he did on behalf of a Turkish-owned company during the transition may have benefited the Turkish government.