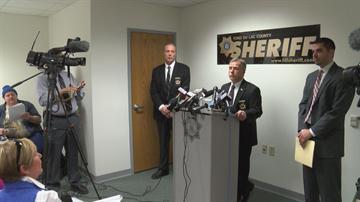 FOND DU LAC -- Sheriff Mylan Fink, Jr. feels like he's the closest he's ever been to catching a killer he's chased since 1990.

\"This is the best, strongest, at least physical evidence we've had to date,\" Fink said at a news conference Monday morning.

Investigators say 18-year-old Berit Beck, from Sturtevant, disappeared in Fond du Lac while driving to a conference in Appleton July 17, 1990.  Police found her van several days later.  Her strangled, suffocated body was found in August, 1990 in a ditch on a rural road near Waupun.

\"It has been a nightmare since the day it happened,\" Fink said.

\"It was the first time I thought we had tangible, physical evidence to intimately put someone into the interior of that van,\" Fink said.

The sheriff wouldn't share what the evidence was, but it prompted detectives to recently photograph Brantner's hands and fingers, which feature a deformity.

\"Based on that and the information from the crime lab, we decided that getting those photographs would be helpful in analyzing that physical evidence,\" Fond du Lac County District Attorney Eric Toney said.

Brantner lived within several miles of where Beck's body was found at the time, but now lives in Kenosha.  His ex-wife told detectives he was a truck driver.

In the meantime, the sheriff's office hopes releasing this information might help jog someone's memory to connect the dots.

\"Twenty-three years ago they wouldn't come forward with that information,\" Lt. Cameron McGee said.  \"Now that the time has passed, they perhaps have kids of their own.\"

The sheriff's office says that Brantner  has not been formally charged with anything.  They're asking anyone who may have information that could help the case to call authorities at 920-906-4777.  That line is an anonymous tip line.
Share this article: