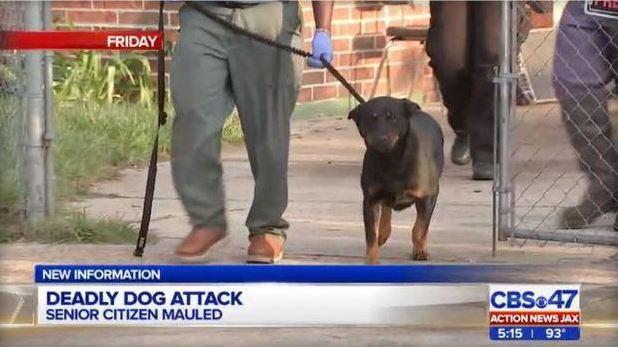 (CBSNews) JACKSONVILLE, Fla. - The fatal attack on a senior citizen in Jacksonville last Friday was so vicious, the dogs dismembered their victim, witnesses say.

“By far it’s probably the worst thing I’ve ever seen in my life,” said Partin. “There was only 30 percent left of his body probably.”

The owner of the four dogs blamed in the fatal attack said neighbors regularly agitated his animals.

Downing was found dead Friday in the backyard of a home next to the apartment complex where he lived in Jacksonville.

The Florida Times-Union reports 52-year-old Lephus Felton, the dogs’ owner, wasn’t home when the attack occurred. A fence separates the apartment complex from the home. On Monday, neighbors pointed out several holes in the fence where they say the dogs slip through.

Felton told the newspaper he’s hopeful the Jacksonville Animal Care and Protective Services will return the dogs once they’ve evaluated them. But neighbors told reporters they hope the dogs will be gone for good.

So far no charges have been filed.

WJAX-TV reports an anonymous call made to city officials in April alleged animal cruelty by Felton.

The caller told investigators the dogs were being kept in “small pens,” “living in filth,” and that the owner hit them with “a closed fist.”

Investigators, however, determined there was “no feces present” and they “appeared to be in good health.”

A warning was issued at the time but neighbors claim more could’ve been done to prevent the recent attack.

WJAX reports freinds say Downing was a retiree who used to work in the Tax Collector’s Office, and had recently suffered a stroke but was active nonetheless.