Five Things You Don't Know About Super Bowl I 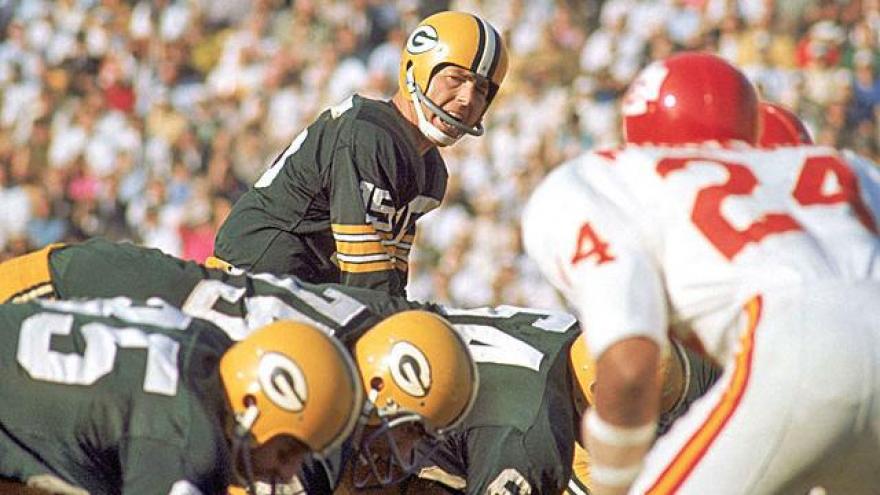 (CBSSports) We're less than one month away from Super Bowl 50, which makes right now the perfect time to look back at the game that started it all: Super Bowl I.

This Friday will mark the 49th anniversary of the NFL's biggest game.

Back on Jan. 15, 1967, the Packers were crowned champions of the National Football League after beating Kansas City 35-10 in a game that was billed the "First AFL-NFL World Championship."

Besides giving us the first Super Bowl champion, Super Bowl I also gave us something else: the first football controversy. It wasn't quite Deflategate, but there was a small uproar over which footballs would be used in the game.

The Packers, who were representing the NFL, wanted to use the NFL's official ball, which is made by Wilson.

On the other hand, Kansas City wanted nothing to do with the Wilson ball. The AFL's Chiefs wanted to use the ball their league had been using all season: the J5-V skinny ball, whichwas made by Spalding. The AFL ball was longer and narrower than the NFL's standard Wilson ball and many players believed that it was easier to throw.

Since neither team was willing to use the other team's balls, the NFL came up with a compromise: The league let each team use its own footballs. So if you see any footage ofSuper Bowl I and you notice there's different footballs, that's why.

Of course, if you do see any footage of the game, it won't be from the broadcast of it, because there's only one copy of Super Bowl and it's under lock-and-key.

Jack Whitaker, the man who announced Super Bowl I for CBS back in 1967, talked about that and a few other things that most people might not know about Super Bowl I. Here's four more such things:

The 91-year-old Whitaker calls that a "shame."

"Money crunchers would come in and get rid of a lot of tape," Whitaker said of what the times were like in the 1960s. "It's a shame we don't have a clean copy."

Although every game is archived now, that wasn't the case when Super Bowl I aired. The only known copy of the game was a recording made by a Pennsylvania man in 1967. The man's son found the recording in 2005 and tried to sell it to the NFL for $1 million.

The NFL balked at the price and now the two sides are at an impasse, according to attorney Steve Harwood, who represents the unidentified man who owns the video.

"The NFL isn't all that interested in our tape," Harwood told the New York Times recently. "They have threatened that if we wanted to sell or profit in any way from our tape with a third party other than the NFL, they would sue us, and my client is not in a position to do legal battle with the NFL. So we've said, 'OK, let's try to work things out,' and they've said, 'We don't need your tape.'"

"We feel being compensated for preserving it for all these years is certainly a reasonable thing to do," Harwood said in a separate interview with CNN. "To put that in perspective, $1 million is the equivalent of about seven seconds of commercial airtime on today's game."

The NFL Network is re-airing Super Bowl I on Friday, but it's not the actual game broadcast. It's footage that has been culled together by NFL Films to recreate the broadcast.

3. Jack Whitaker is the only announcer from the game who's still alive. Whitaker was in Pasadena for CBS' Television Critics Event on Tuesday, and during the CBS presentation, the network surprised Whitaker by showing a clip from the beginning of Super Bowl I that the 91-year-old had never seen.

"It's like looking at old movies," Whitaker said. "It was kind of fun to see."

In the clip, Whitaker was introducing the game with colleague Ray Scott. A total of five television announcers -- Whitaker, Scott, Frank Gifford, Curt Gowdy, Paul Christman -- worked Super Bowl I, and Whitaker is the only one who's still with us.

During the Television Critic's event, Whitaker and Jim Nantz, the man who will be on the call for Super Bowl 50, took some time for a photo-op with the Lombardi Trophy. Whitaker was the first man who Nantz called after Nantz learned that he'd be calling his first Super Bowl.

The compromise? NBC was allowed to broadcast the game, but it had to use the CBS feed.

Whitaker, who was the CBS play-by-play man for the second half, says that it wasn't exactly easy directly competing with another network on such a huge broadcast.

"We were all a little apprehensive. Not only were bragging rights at stake, but whoever won was able to charge more for their commercials for the following year," Whitaker said.

However, the veteran announcer did point out that he when the camera wasn't rolling, he was buddies with the NBC guys.

"We were all kind of pals," Whitaker said.

"We had no chance to look at Kansas City because we were working when they were playing," Whitaker explained.

Since there was no film for Whitaker to access, the only way for him to see the Chiefs would have been attending a game, but he couldn't do that because he was working every Sunday for CBS.

Coming out of halftime, NBC didn't cut back from commercial in time to catch Don Chandler's opening kickoff of the second half, so the network got the NFL to have the two teams replay the kick. Seriously, there were two second-half kickoffs.

The Super Bowl has come a long way in 50 years, and the NFL probably won't be replaying any downs on Feb. 7 when Super Bowl 50 airs live on CBS from Levi's Stadium.