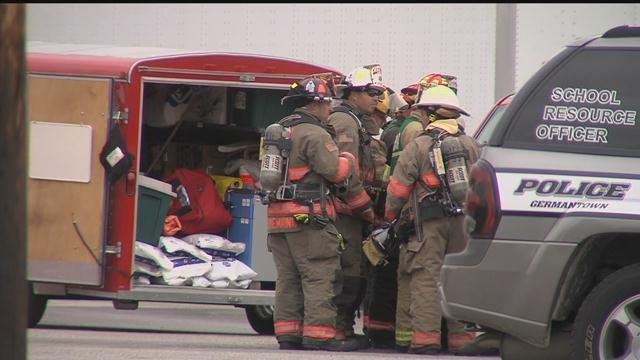 An explosion at a dairy processing plant led to the release of dangerous chemicals Tuesday morning,  the village of Germantown Fire Chief said.

It all started around 10 a.m. when a contractor mixed two chemicals that were not supposed to be mixed. It caused a 100-gallon-sized container to burst sending dangerous chemicals into the air.

Hazmat crews entered part of the building to air out after what was essentially a mild 'mustard gas' threat, Chief Weiss said.

"Now the concentrations here weren't what they were in World War I but it is a high enough concentration so some people had some breathing difficulties," Chief Weiss said.

"It's just a respiratory contaminant. It could do some lung damage and things like that. I don't think they inhaled enough for that. But to be on the safe side they have to get some tests at the hospital," Chief Weiss said.

Investigators said the reason for the explosion was a contractor's mistake: mixing a caustic solution with an acid.

"I don't know why they added the acid to it. It was a mistake. I'm sure they use acid in their process. What exactly they use it for I don't know. But adding it to that product caused a problem," Chief Weiss said.

CBS 58 News has not yet received a comment from Gehl Foods on the situation.

The facility produces dairy items like pudding, smoothies, and if you've ever used a nacho cheese dispenser at a gas station - there's a good chance that product comes from them as well.