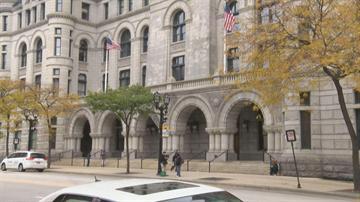 MILWAUKEE -- Plaintiffs say they're defending a \"sacred right\" - your right to vote.  They think Wisconsin's Voter I.D. Law takes away that right from many minorities, perhaps on purpose.

But the state disagrees, saying its law protects that right from voter fraud.  The two sides took the debate into federal court Monday.

\"This law disenfranchized voters and makes it harder for people to votel\" attorney Leigh Chapman with the Advancement Project said.

Her group is arguing against Act 23, the so-called 'Voter  I.D. Law' that required a state-issued photo I.D. At the polls.  But some people, mainly minorities, struggled to get them.

\"When I went [to the DMV] initially, we thought it was just going to be a matter of routine,\" Debra Crawford said.

Crawford's mother, Betty Jones, was one of those voters affected by the law.  Crawford moved her mother to Wisconsin from Ohio in 2011.  But her mother, born in the south in the  1930s, didn't have a birth certificate and couldn't get an I.D.

\"She was frustrated, she was angry and she was persistent,\" Crawford said.  \"She said, 'Deb, do whatever you have to do.'\"

The law only stood for the February 2012 primaries before a Dane County judge blocked it.  Crawford's mother passed away a year ago, but her daughter testified this morning on her  behalf.

\"I really question what the underlying motivational factor would be to feel that the state of Wisconsin, unlike the other states has to have this overly stringent requirement,\" Crawford said.

The state doesn't see it that way.  Lawyers from the Attorney General's office are working to uphold the law, saying it will help prevent voter fraud.  Those attorneys won't comment during the trial, but Attorney General J.B. Van Hollen released the following statement, saying in part:

\"The votes of lawful voters should not be dimished by those casting unlawful ballots.  Our democracy demands integrity in the conduct of elections at every level, particularly the ballot box.\"

Eleven states currently have some form of a photo I.D. law in place, including Michigan and Indiana.  Wisconsin is one of seven additional states looking to add to that  list.

\"Are we at the point where because you don't have money or influence or power, you don't have the right to cast your vote suddenly,\" Crawford asked.

Lawyers expect the trial to go on in federal court for up to two weeks.