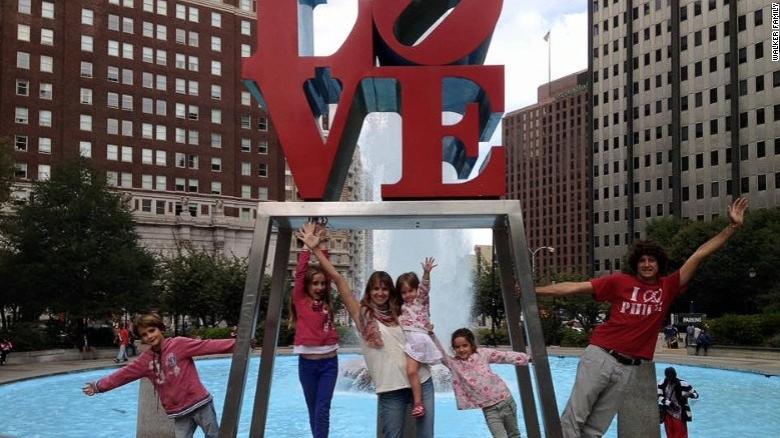 (CNN) They traveled 13,000 miles in a Volkswagen bus through 13 countries and were only 30 miles from their destination, Philadelphia, when it broke down. Again.

By now, they were accustomed to the idiosyncrasies of their beloved bus. Still, after 194 days on the road and on the city's outskirts, they dealt with one more disappointment.

But again with the help of Good Samaritans, they got the bus going again and finally arrived this week in the City of Brotherly Love, the culmination of a journey of epic proportions. They had embarked on the long trip to spend time together as a family and to see the man who reinvigorated their faith, as he has for so many Catholics: the Pope.

Catire Walker, 41, his wife, Noel Zemborain, 39, and their four children ages 3 to 12 left their home in Buenos Aires back in March. They packed all they would need into a remodeled 1980 Volkswagen and began driving north.

They were not hippies, they insisted, but admitted they were a bit crazy to take on such an adventure. But for Catire and Noel, it was important to make this road trip. It afforded them the time they wanted to spend with one another.

"We celebrate the family. Ours and all," they posted on their Facebook page upon their arrival this week in Philadelphia.

The journey, said Noel, has been enriched by their many encounters with people along the long route who opened up their homes and their hearts. She thanked them in her post.

"We are so happy. Today you were all in the van with us!"

I first encountered the Walkers in Guatemala City. I flew there to spend a few days traveling with them for a CNN story but we had not gone far when the engine of the Volkswagen bus chortled and gasped and fell silent. We were towed back to Guatemala City, where we spent several conversation-rich days together.

Pope Francis, they told me, would approve of their love of family. He has, after all, made family one of his hot-button issues on his current visit to the United States.

This week, the Walkers are attending the 2015 World Meeting of Families, a central event of the papal visit. Their VW bus, named Francisca after the Pope, bears a sticker with the event's logo.

Everywhere the family visited, the curious stopped to ask -- and were left in awe of their love for one another and their faith in God.

Faith, for the Walkers, has never been about church and its rituals but about the everyday occurrences of life. In Francis, they finally saw a pope who understood ordinary people like them, a pope who talked about things no pope had discussed openly before.

Besides, they felt immensely proud that Francis was a fellow Argentine. They had followed Jorge Bergoglio closely when he was archbishop of Buenos Aires and had even seen him up close right after he was named Pope. Now they are eager to attend Sunday's outdoor papal mass on Benjamin Franklin Parkway.

The Walker family began planning their papal vacation a year ago. It took them months to save money, pack and store their belongings and get the VW ready for travel. Then they were off.

I happened to be with them when they met with their biggest mishap in Guatemala where they were delayed by almost three weeks waiting for their van to be repaired. They told me they eventually found the most renowned VW mechanic in the region.

Guatemala turned out to be an aberration that forced them to alter their plans and skip Belize and the Yucatan Peninsula of Mexico. Instead, they made their way to the U.S. border, crossed over in eastern Texas and drove toward Louisiana.

"We love New Orleans!" Noel said in a message earlier this month.

A few days later, the bright aqua VW was parked at my house in Atlanta. Noel joked that after several breakdowns, Catire, a food services manager, was now qualified to work as a VW mechanic.

I had only known them for a few days in Guatemala but they seemed so familiar to me during their visit to my home. The children, Cala, Dimas, Mia and Carmin, gave me big hugs and kisses. It was as though my own family was visiting.

Almost everyone who has met the Walkers has the same sort of reaction: They are a remarkable family who embarked on a remarkable journey.

In this complex world of myriad distractions and little time, the Walkers symbolize the things that matter: compassion, caring, love. They seem emblematic of the message Pope Francis is striving to bring to America.