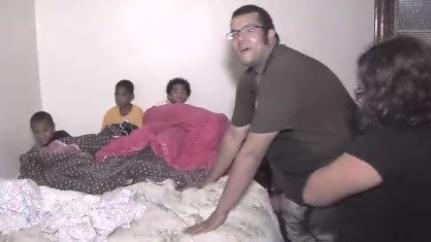 A father and daughter were kicked out of a Racine homeless shelter left with no place to go, but thanks to the kindness of many strangers-- tonight, they have a place to call home.

\"It's going to be filled with so much warmth and love,\" said Derreck Gray, inside his new home.

Candles light the way through Derreck and his daughter's new home.  Their family is still waiting for power, but Derreck says they're just lucky to have a roof over their head.

\"I was kind of speechless, overjoyed,\" said Derreck.

A generous stranger gave them the house after they were told to leave the Halo homeless shelter Monday.

\"I had no idea where I was going to go, I have no family out here,\" said Derreck.

Derreck says they were kicked out of the shelter after a dispute over lunch.  We asked Halo for comment, but officials declined our request.

\"It wouldn't have been a bad idea if they put me out,\" said Derreck, \"but putting my daughter out on the streets, that's what really upset me.\"

The single father and his ten year old daughter, Alexis, soon met a woman who would put a roof over their head.

\"I'm just so glad she opened her heart,\" said Derreck, \"and welcomed us into this nice, beautiful house.\"

Together, Derreck and Alexis walked into a two bedroom house to call their own.

Not long after opening the door, Alexis picked out her bedroom upstairs.

When she saw the pink sticker on the wall that said \"Girly,\"  she knew the room was hers.

\"When I get it all situated, I want to paint my room pink,\" said Alexis.

The woman who gave Derreck and Alexis their home, only would be the first of many generous strangers.

There was the person who gave Derreck a new bed, the people who filled their kitchen cupboards with food, and the ones who gave their family some of the things-- many of us take for granted, like hygiene products.

For The Grays, the community's generosity has been overwhelming, and once they settle in-- they plan to pay it forward.

\"I can share the opportunity by helping other people out,\" said Derreck.

Derreck says he will open his home to friends from Halo who need a place to go during the day.  He says he also plans to donate some of his daughter's old clothes to help other children in need.