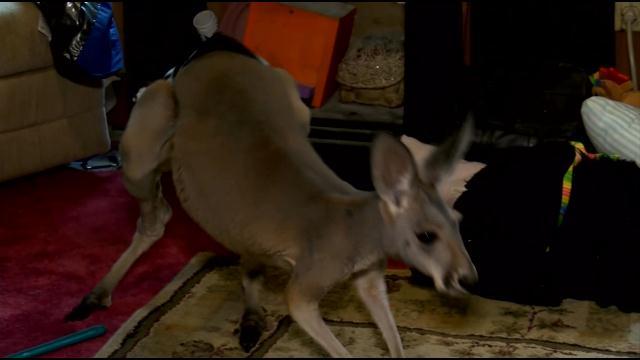 Just 9 months old, Diana Moyer's beloved therapy kangaroo, Jimmy,  has lived with her his whole life, but after Monday's council vote, he'll have to get a new home.

\"I don't know what their problem is. I think they've learned to pick on us and pick on the disabled and that's exactly what they're doing to me. Taking my rights away from me to be happy and to have Jimmy,\" said Diana Moyer.

Diana  Moyer says she and her husband Larry have had kangaroos in their Beaver Dam home for eight years without any problems.

\"Our neighbors love the kangaroos. Never had a problem. I don't know where the city stands on it,\" said Moyer.

Moyer says her kangaroo isn't a service animal, rather, a therapy pet to keep her mind off of her cancer.

\"Jimmy is just so special so loving; he's always there when I need him,\" she said.

But problems did start in February when Moyer brought Jimmy to McDonald's. A cop showed up after a patron called the department.

\"I showed him my paper to prove that he was my therapy animal and he said ok, that's fine, everything's fine. And  he asked to see Jimmy and said oh he's cute,\" said Moyer.

Diana says she doesn't have any children, and Jimmy is her baby. She says he's never had any problems outside the home.

Monday night with a 14-0 vote, Beaver Dam passed an ordinance that aligns with the American Disabilities Act, defining a service animal as a dog or small horse. It's something Moyer disagrees with.

\"We depend on these animals for our sanity; our emotions. Our place to go when angry, sad or crying they're there for you no matter what,\" said Moyer.

Moyer lives in Beaver Dam, taking care of her elderly mother, but she does have access to a farm in Columbia. She said Jimmy has been staying there, and now, will live their permanently.