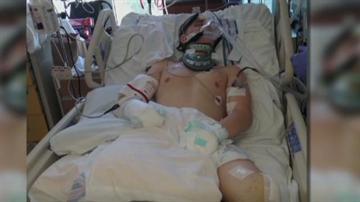 Palm Desert, California (CNN) -- It was mild curiosity that drew John Virgin and his son Bryce to the flashing lights and commotion of an accident scene near their home.

In the back of John's mind was his older son, Grant, who had gone for a walk nearby minutes earlier.

He gestured to an emergency medical technician to ask what happened.

John looked down at the area that had been cordoned-off -- the pavement covered with blood -- and his heart sank.

Minutes earlier, the 16-year-old had been airlifted to a nearby trauma center after being struck by a hit-and-run driver. He had a long list of injuries: a torn aorta, a traumatic brain injury -- including skull fractures and bleeding throughout his brain -- compound bone fractures and spinal fractures. Seemingly endless bits of broken glass and gravel were embedded in his skin.

John and Bryce Virgin rushed home to break the news to Grant's mother, JJ. Then the family hurried to the hospital, hoping to find him still alive.

When they arrived, they were met by grim-faced doctors who offered the slimmest odds that Grant Virgin would live through the night.

Instead of shrugging their shoulders in acceptance, his parents were indignant.

\"It's like, how dare you not fight for my son's life?\" said JJ Virgin. \"It really took us ... getting very aggressive and assertive to save our son's life, because they weren't going to do it.

From that moment forward -- time and time again -- they would go against doctor's orders. That included trying unconventional, untested therapies -- anything that might help Grant. One in particular involved giving him high doses of omega-3 fatty acids (found in fish oil).

Fish oil is what the Virgin family believes ultimately -- dramatically -- altered his life course, and healed his brain.

Weeks before fish oil was even considered, Grant Virgin underwent multiple surgeries, and spent considerable time on a ventilator.

Eventually, his body was stable, but his brain was still riddled with damage. He was in a coma, and his doctors urged his family to \"wait and see\" while his brain healed.

The doctor's response, according to her: \"'Nope, there's nothing we can do. We just wait. The brain's got its own time schedule.'\"

Around the same time, she was receiving a flurry of advice from friends. One suggested trying progesterone to heal her son's brain.

In early studies, progesterone has been associated with reduced inflammation in the brain and improved neurological outcomes after traumatic brain injury. But the data in this area, although promising, are very early.

Despite that, beginning about two weeks after the accident, his mother and father began intermittently rubbing a cream containing progesterone on him. (A leading expert questioned the efficacy of administering progesterone in this way, noting that in studies, it is administered intravenously.)

His family says very soon afterward, Grant Virgin emerged from his coma, and began to speak.

It was mostly a few words and phrases -- \"Let's go\" or \"I love you\" -- uttered in endless cycles, but his family was heartened by his progress.

\"You're holding on to anything that you can see and monitoring everything, every single day. And so it was very clear when the acceleration happened. Really clear.\"

JJ Virgin got more advice, this time from friends who had seen a CNN report about high-dose fish oil used in cases of severe traumatic brain injury.

She got in touch with one of the foremost omega-3 experts, Dr. Barry Sears, who had consulted on the first-ever case of high-dose fish oil for traumatic brain injury in 2006.

It involved a miner, Randal McCloy, who was involved in a deadly explosion in West Virginia. His brain had been badly damaged by carbon monoxide, and his team of doctors was trying desperately to keep him alive.

McCloy's neurosurgeon at the time, Dr. Julian Bailes, describes considering high-dose fish oil in this case, as akin to \"throw(ing) the kitchen sink at him.\"

\"There is no known solution, there's no known drug, there's nothing that we have really to offer these sorts of patients,\" said Bailes, co-director of NorthShore Neurological Institute in Evanston, Illinois, during a previous interview with CNN.

The theory behind fish oil as a therapeutic intervention for traumatic brain injury is at once simple and complex.

\"If you have a brick wall and it gets damaged, wouldn't you want to use bricks to repair it?\" said Dr. Michael Lewis, founder of the Brain Health Education and Research Institute. \"By supplementing using (omega-3 fatty acids) in substantial doses, you provide the foundation for the brain to repair itself.\"

More complicated is how omega-3 fatty acids might control inflammation -- or damage -- in the brain. Sears likens it to quelling a metaphorical fire in the brain.

That \"fire\" begins when the brain is traumatized -- as with a profound injury like Grant Virgin's, or milder insults like concussions suffered on a soccer field. Neurons snap, setting off a wave of inflammation in the brain that can smolder for long periods of time -- sometimes weeks or months after the injury has occurred.

\"That (inflammation) will continue over and over unless there's a second response that turns it off,\" said Sears, president of the Inflammation Research Foundation.

The fatty acid that Sears says can effectively \"turn off\" that inflammatory fire is a metabolite (what remains after the body breaks something down) of eicosapentaenoic acid, or EPA, called resolvin.

EPA is found in fish oil.

\"What we think is happening is, high levels of EPA coursing in the brain metabolize into resolvins, turning down and turning off inflammatory process,\" said Sears.

Considering that, according to the Centers for Disease Control and Prevention, 1.7 million traumatic brain injuries occur in the United States each year, any intervention -- especially a cheap one like fish oil -- is an exciting prospect.

But fish oil as a viable and well-studied intervention is still a ways off; for now it dwells in the realm of the anecdote or case study.

There is McCloy, who recovered only a few months after his mining accident.

And a case similar to Grant Virgin's: a teenager named Bobby Ghassemi who nearly died in a car accident before getting a large infusion of fish oil. A few months later, he attended his high school graduation.

There was the case of an 8-year-old girl who nearly drowned after her stroller rolled into a canal. Her head and face were under water for more than five minutes.

Eighty-two days after her accident, according to a case study published last year in the journal PharmaNutrition, she was given high doses of omega-3 fatty acids, after which, \"...the patient exhibited very gradual but steady progress in terms of her tolerance for stimulation and activity.\"

There are seven such cases in the medical literature, according to Sears.

But there are other cases -- likely many more than have been successful -- when fish oil was tried and did not work.

It could be that fish oil was administered outside the optimal therapeutic window. Or perhaps younger brains are more receptive to the intervention (most of the successful case studies are among young people).

And there is a concern among doctors that high doses of fish oil could cause excessive bleeding.

Those caveats, well known to Grant Virgin's family, did not deter them.

Nine weeks after the accident, as Grant was being transferred from an acute care to a rehabilitation hospital, the Virgin family told doctors at the new facility that he was already on a 20-gram-per-day regimen of fish oil.

In reality, his parents had been sneaking a few grams of fish oil into his feeding tube for weeks, but nothing resembling that high dosage.

Two days after he began at this more aggressive dosage, JJ Virgin got a phone call late one night.

\"I get this call like midnight, and I'm asleep, and I wake up the next morning and go, 'Did Grant call me and did we have this whole conversation?'\" she said. \"I just remember waking up the next morning going, 'I must have dreamed that, that couldn't have possibly happened.\"

When she arrived to the hospital the next morning, a nurse told her that, in fact, it had not been a dream.

Forty-eight hours after receiving high-dose fish oil, Grant Virgin asked a nurse for a cell phone to call his mother, and proceeded to have a conversation with her.

Unbelievable, especially considering that was only two months after Grant Virgin's parents had been told to \"let him go.\"

\"We had been told he'd never be able to recognize anybody, he will never be able to focus his eyes, all the grim stuff,\" said John Virgin. \"(They said) the diffuse damage to his brain is so much that he's never going to be Grant again.\"

Today, 16 months after the accident, none of that is true. In fact, his parents say he is even better than he was when he made that call to his mother.

\"We're not expecting Grant to get close to where he was before, he's going to be better than he was before,\" said his father. \"And he's progressing every day.\"

The Virgin family says that progress would not be happening if they had merely accepted what conventional medicine told them.

\"I think one of the saddest things is to get to a place and have someone tell you, 'You should just let your son die,' and you don't have the information to make the right decision,\" said JJ Virgin.

\"There is such hopelessness about brain injury and there shouldn't be.\"

That rampant hopelessness when it comes to traumatic brain injury is fueling a push by Bailes and Sears to do further studies about omega-3. (Bailes receives research money from fish oil companies, and Sears has his own EPA-rich formulation of fish oil).

They are on the cusp of beginning a broader study to find out if omega-3 can be a useful intervention for some people after traumatic brain injury.

The Virgin family, based on their own dramatic experience, is sure that omega-3 will do for others what it did for their son.

\"OK, what if it didn't do anything?\" said John Virgin. \"It certainly couldn't hurt, but what if you have this kind of result?\"