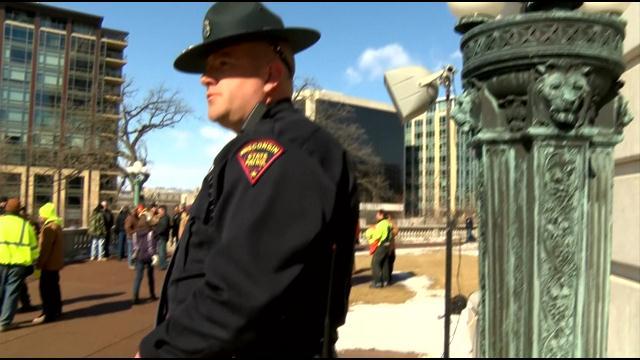 Thousands of protestors both inside and outside the capitol building in Madison prompted increases security Tuesday.

More state troopers were visible and signs were posted on items that would not be allowed inside, including balloons, mattresses and crock pots.

This hearkens back to the Act 10 protest when people camped out inside the rotunda.

Once the hearing wraps up for the day, everyone will have to leave.

The capitol will open Wednesday at 8 a.m.

\"There should be no reason that I should be compelled to help support any cause that I don't believe in,\"  Nate Nelson who supports the Right to Work Bill testified before state senators.

\"I respectfully ask that you do not support this Right to Work bill. Like others in the state, I'm also losing sleep.\"


But Marquette Professor Abdur Chowdhury cautioned. \"If we have a right to work law in Wisconsin this leads to loss of income\" ?

Governor Scott Walker had appearances in Green Bay and Wisconsin Rapids. Although not the focus of his planned visits he was asked and responded to questions about right to work.

\"I think the proof is in the pudding,\" said Governor Walker. \"Our neighbors in Indiana and Michigan, some of those same complaints were made four years ago and instead, you see strong economies comebacks in both Michigan and Indiana who have gone through this process just a few short years ago, so this isn't just in theory, in practice, those areas see unemployment going down, they see positive results there.\"

The bill is expected to be taken up by the full senate Wednesday.
Share this article: