Evers says he's looking at higher taxes on the wealthy 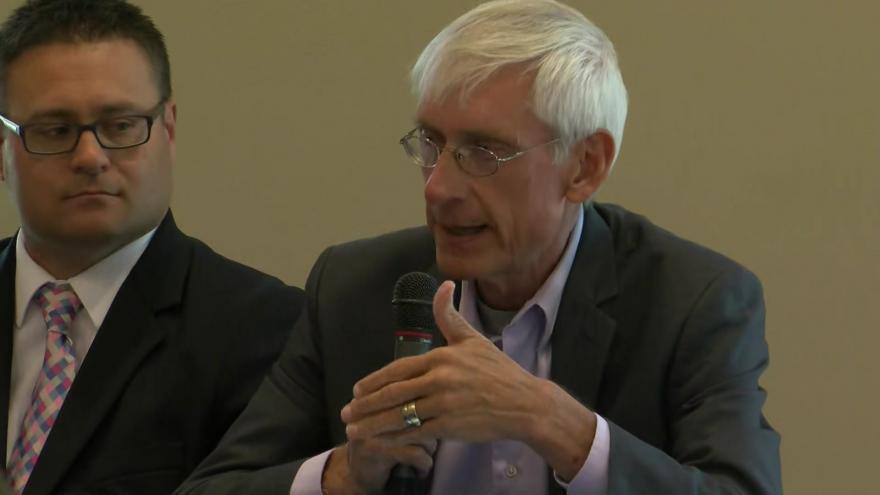 MADISON, Wis. (AP) — Democratic gubernatorial candidate Tony Evers said Thursday he wanted to raise income taxes on the wealthy in order to provide working families a break, feeding into attacks from Republican Gov. Scott Walker and his allies who are warning of tax hikes and economic failure under Evers.

Evers, at a news conference after a speech where he said the state's priorities are "out of whack," said he wants to keep tax increases to a minimum. But Evers also said he wanted taxes to be "shifted a little bit" to benefit working families and "anything is on the table."

Evers also repeated that all options for road funding, including raising gas taxes, would be considered as part of a plan to bring Republicans and Democrats together. But he rejected the allegation from Walker that he would consider raising the gas tax as much as $1 per gallon, calling it "ridiculous."

"Who the hell would?" Evers said.

Walker has ruled out raising gas taxes without a corresponding tax cut elsewhere.

Evers also supports eliminating a manufacturing and agriculture tax credit Walker signed into law, noting 93 percent of the benefit goes to taxpayers who make more than $250,000 a year.

Walker, through a new television ad , and Republican state lawmakers at a news conference said higher taxes would hurt the state. They also called for Evers to release more details. He has not put forth a plan.

In the ad, his 20th of the campaign, Walker speaks directly to the camera and says: "With all of the attack ads these days, it's easy to forget" positives like lower property taxes, strong schools and that more people are working now than ever.

Walker then goes on to criticize Evers, saying he'll raise property, income and gas taxes and that this "would put our jobs at risk."

Rep. Mark Born, who is on the Legislature's budget committee, said Evers would take the state backward.

"Wisconsin will no longer be open for business under Tony Evers," Born said.

Evers stressed that he would prioritize Wisconsin-based businesses, not international companies like the Taiwan-based Foxconn Technology Group that could benefit from more than $4 billion in state and local tax breaks under a deal cut by Walker.

Evers, the state superintendent, also took swipes at Walker in his annual state of education speech, saying "Divisive solutions from Washington and Madison haven't made things better. These policies are failing us."

He proposed an education budget that would raise state aid to schools by 10 percent, a dramatic increase Evers said could be paid for without a property tax hike.

Walker has cut Wisconsin's taxes by about $8 billion since 2011. He is calling for about $200 million in tax breaks in the next state budget, which the Legislature would consider if he is re-elected.

A poll this week showed Evers with a slight lead over Walker. The Nov. 6 election is less than seven weeks away.