Evers, Republican at odds over how to spend additional $4.4 billion in new revenue projections 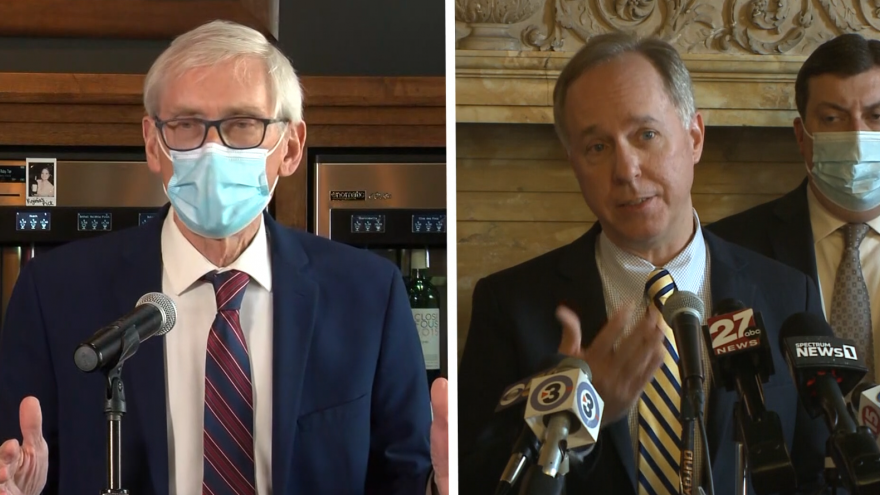 MADISON Wis. (CBS 58) -- Gov. Tony Evers and Republican lawmakers are at odds over how to spend an additional $4.4 billion Wisconsin is now expected to collect over the next three years.

A memo from the Legislative Fiscal Bureau released on Monday, June 8th, states Wisconsin is projected to see $4.4 billion in tax collections over the next three years, a large surplus of funds than previous estimates.

"The increase in general fund tax collections in 2021, particularly in the months of April and May, is unprecedented," said Bob Lang, Director of the Legislative Fiscal Bureau.

Gov. Evers and lawmakers can use the influx of cash to cut taxes, pay down debt, increase funding for schools or invest in other state agencies, but there's already signs it will be difficult for both sides to reach an agreement.

Evers said in an interview with CBS 58 he wants to lawmakers to use the funds toward education after Republicans on the budget committee invested $128 million for K-12 schools, which is far below what they need to meet under federal guidelines to secure $1.5 billion in coronavirus relief aid.

"I'm really counting on Republicans to figure out what they're going to do with this budget," Evers said. "We have a situation where they are not spending the money they need to spend to allow our schools and Universities to have the federal money they need to finally recover from this pandemic."

Top Republicans on the other hand are calling the massive influx of money a "one-in-a-generation opportunity" and want to use it to provide tax relief to Wisconsinites.

“Hard-working taxpayers gave the state a massive surplus," said Senate Majority Leader Devin LeMahieu. "We will take this moment to consider ways to significantly reduce the tax burden on workers and main street businesses and pay off state debt to save taxpayers long into the future.”

Gov. Evers said before he considers tax relief, he wants lawmakers to invest more money on schools, calling the current budget "a mess."

"Giving it all back in tax relief might make everyone happy, but in a couple of years will be sitting here and saying where are we going to get the money to run state government," Evers said.

Republicans lawmakers also urged caution not to spend the money on Evers priorities.

"If we recklessly spend this new money and grow taxpayer obligations in an unsustainable way, we risk future fiscal stability - a stability Republicans have spent a decade cultivating," said Senator Howard Marklein (R-Spring Green), co-chair of the budget committee.

Evers responded to those commented saying "now suddenly they are calling it risky using state money to fund help fund our schools -- that's a risky statement."

The governor also announced he was rescinding $300 million in previously announced budget cuts in state government made during the pandemic. One includes returning more than $50 million to the UW-System and technical colleges.

The announcement comes as members on the Joint Finance Committee were set to meet to discuss building projects and transportation funding as they work over the next month to send a budget to Evers desk. Evers can then sign it, veto it entirely, or make line-item vetoes to make changes to his liking.

However, it's unknown whether or not news of the influx of funds would delay the budget deadline, July 1st.