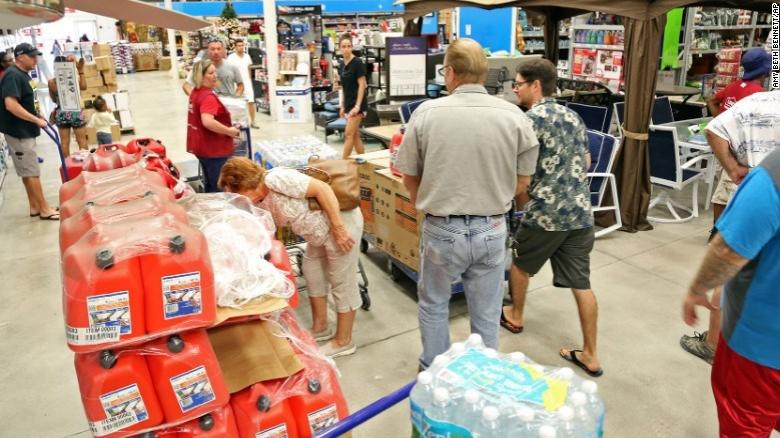 (CNN) Hurricane Matthew likely won't strike the US for another day -- but after seeing its devastating impact on Haiti, many are not taking chances.

They've raided stores for supplies, waited in seemingly endless gas station lines and evacuated their homes as the storm threatens much of the East Coast.

After its harsh winds and heavy rains assailed Caribbean nations, Hurricane Matthew continued early Wednesday its march toward the US. The deadly hurricane, which has sustained winds at 125 mph as it heads toward the Bahamas, has triggered a hurricane warning for parts of Florida -- and started to cause headaches elsewhere along the East Coast.

Forecasters predict it will be a Category 4 hurricane by the time it brushes up against the East Coast -- including Florida, Georgia, South Carolina, and North Carolina -- sometime between Thursday evening and Saturday.

The Hurricane Center said the storm could make landfall in any of those states. It also noted that long-range forecasting can be imprecise and cautioned each of those areas to be on guard.

"When a hurricane is forecast to take a track roughly parallel to a coastline, as Matthew is forecast to do ... it becomes very difficult to estimate impacts this far in advance," the hurricane center said.

State officials this week have warned residents and visitors of potential miserable times ahead. So far, Florida gas stations attendants have seen long lines, South Carolina motorists have endured heavy gridlock on highways and North Carolina tourists have been told to cut their vacations short.

Here are how Southern states are preparing for potential effects as Matthew moves north:

Earlier this week Florida Gov. Rick Scott declared a state of emergency for the entire state. In doing so, he warned that a direct hit by Matthew could lead to "massive destruction" on a level unseen since Hurricane Andrew devastated the Miami area in 1992.

The top priority, Scott said, would be to ensure that Florida did not add to Matthew's death toll, which has climbed to seven people by late Tuesday.

"We have to be prepared for a major hurricane," Scott said. "We have to prepare for a direct hit."

Scott advised Florida residents who live near the East Coast to leave before travel becomes difficult. He told reporters Tuesday that evacuation orders could be imminent.

Brevard County commissioners ordered one of the state's first mandatory evacuations for residents of Merritt Island and other barrier islands. Residents are being ordered to leave starting 3 p.m. Wednesday.

The effects of the incoming storm have already been felt at gas stations in south Florida. CNN affiliate WSVN reported long lines at gas pumps at a Costco in North Miami Beach.

"I'm just waiting my turn," one woman told WSVN while being interviewed from behind her wheel. "I know it'll be worse tomorrow."

In Juniper, Florida, local resident Randy Jordan told CNN affiliate WPEC people were pushing and shoving their way through the local Home Depot to ranging from batteries to flashlights.

"The vibe on the street this morning is pre-panic," Jordan said. "By tomorrow, it should just be a brawl."

Gov. Nathan Deal has declared a state of emergency in 13 coastal counties.

"We urge residents in these areas to remain calm but vigilant as they prepare for potential impact," Deal said.

South Carolina Gov. Nikki Haley, who also declared a state of emergency, said the emergency workers would begin medical evacuations ahead of Hurricane Matthew on Tuesday and coastal evacuations on Wednesday afternoon.

The South Carolina Department of Transportation had started to use lane reversals to accommodate traffic leaving coastal cities like Charleston. On Interstate 26, the main highway out of Charleston, cars crawled west Tuesday night in bumper-to-bumper traffic, according to CNN affiliate WSPA and a CNN producer.

Schools and government offices in 25 counties will be closed Wednesday. Some schools will double as evacuation shelters.

Gov. Pat McCrory declared a state of emergency for more than half of the state's 100 counties.

"Many of our central and eastern counties are already saturated from storms during the past few weeks," North Carolina Emergency Management Director Mike Sprayberry said. "We are preparing for additional flooding, downed trees and widespread power outages in the coming days."

The University of North Carolina-Wilmington has also ordered students to evacuate no later than noon Thursday.