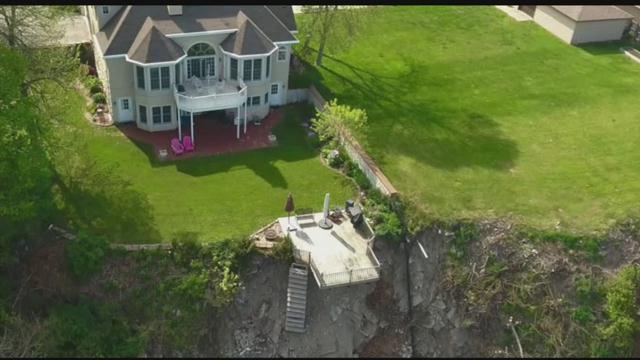 Last week CBS 58 reported on the erosion now seriously eating away at the Lake Michigan bluffs in Racine County in both Mount Pleasant and Caledonia. The problem has prompted a declaration of emergency.

Fifty years ago some of these homes sat 200 feet away from the lake, now for some its just twenty and they're losing more each passing day.

"Eventually these trees and the rest of this bank will end up in the lake," said Mount Pleasant Village President Jerry Garski.

Garski says the erosion has been happening for years but with this year's high water level and recent storms its worse than its ever been.

"When the ground gets saturated and we get the northeast winds, it just beats on these banks and digs out the tow of the bank, the bottom. And then eventually it either slides down or falls over," said Garski.

And that's why County Executive Jonathan Delagrave issued a declaration of emergency which allows the county to close roads, evacuate homes and ask the government for help.

"If by doing declaration it will make the state and feds aware something has to happen now. People are suffering; they're going  to lose their property," said Delagrave.

But the possibility of losing their home is all too real to the people who live here. This yard in particular lost five feet in just a couple days last week and the problem is most of these homeowners don't have the means to fix it.

"Honestly I'd love to see a truck here with rock and excavators placing it at the tow but these people are medium income houses and they don't have the funds to do this. And this seems to be our problems no one has the funds at the local, private and state level," said Garski.

Garski says if the problem isn't taken care of now it will spread and the whole village will feel the effects.

"We're not just talking about the houses. It's very real that if I am to lose Sheridan Road there wouldn't be a north-south route for emergency services," said Garski.

Garski believes within the next week, the village will have to decide whether some of these homes need to be evacuated. He says the erosion is dangerously close to swallowing up utilities, water and sewer lines and a fire hydrant, and if those are swallowed up; residents will have to leave.

Representative Peter Barca, who is on the FEMA advisory council issued this statement:

“One house has already been claimed and a dozen more are in danger on the Lake Michigan coastline in Mount Pleasant due to the soil erosion caused by the rapidly rising water level. As a member of the FEMA Advisory Council, I have been in touch with federal and state entities to address this problem swiftly. I applaud the efforts of local leaders, including Village President Gerald Garski and County Executive Jonathan Delagrave—who today declared a state of emergency—for doing everything they possibly can for the people affected. Our next step will be reaching out to other counties and municipalities on the Lake Michigan shoreline that could be in danger.

There are people in Wisconsin right now who could wake up tomorrow without a home; we need to take action as quickly as possible. For the people of Mount Pleasant, time is of the essence.”

Garski says he's in contact with the Army Corps of Engineers and hopes to hear back from them Friday.