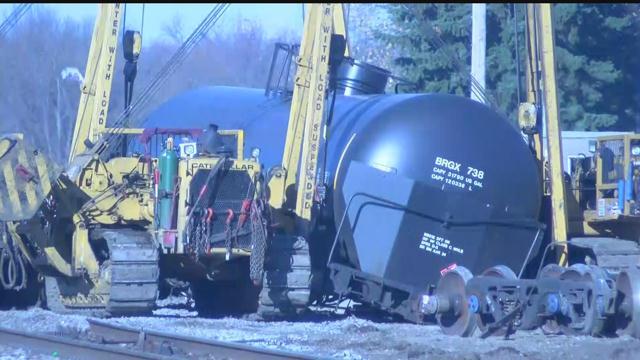 Dozens of families remain out of their homes nearly 24 hours after a train traveling to Pennsylvania carrying oil derailed in Watertown. This was the second train derailment of the weekend in Wisconsin.

Crews have been busy all Monday morning uprooting several of the derailed cars onto a temporary track.

"We have actually trained for this kind of thing and they responded in a fantastic manor," said Mayor of Watertown, John David.

Of the 13 derailed rail cars, only one began leaking crude oil.

The Environmental Protection Agency was on the scene.

“The leak has been stopped. The leak spilled to the soil, it has not left the site, it has not impacted any waterways. The EPA is conducting air monitoring," said Michael Beslow, EPA’s on-scene coordinator.

Crews at noon on Monday were removing the derailed cars from the scene, the soil where the oil leaked will have to be hauled away.

There were 35 homes evacuated.

"I have no clothes for work, she's missing a school exam," said Michelle Plaisance, a resident who has been evacuated.

Residents were put up in local hotels and now they just want to get back home.

Safety is Number One Priority

Crews will re-evaluate the situation at 4:00 PM and determine if people will be allowed back home.

They emphasize safety is their number one priority.

Meanwhile, the cause of the accident could take months to determine.

The Watertown derailment is also impacting Amtrak trains this afternoon.

Service was disrupted on the Empire Builder line that runs from Chicago to Seattle.

A train with 148 passengers was stuck on the tracks near Racine yesterday for more than nine hours.

Eventually it turned around and headed back to Chicago.

Amtrak said it's providing alternate transportation for passengers who are traveling that route today.

The derailment in Watertown happened just one day after more than two dozen train cars derailed in Western Wisconsin near the Minnesota border.

As a result of that one, thousands of denatured alcohol spilled into the Mississippi River.

Booms were in place to keep the product from going downstream. The chemical will vaporize on its own, unlike oil, but it can reduce oxygen levels in the water.