Eager gamers camp out for Playstation 4 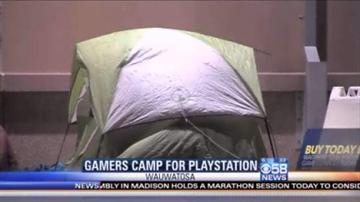 WAUWATOSA -- Some local gamers were really pumped about today's release of the new Playstation 4 console.

CBS 58 found three people camping out in a tent outside the Best Buy store on Mayfair Road in Wauwatosa.

They were waiting for the midnight release of the new system as workers from the store fired up the crowd.

Another new system, the X-Box One, comes out next week.