Driving down as bike commuting on a roll 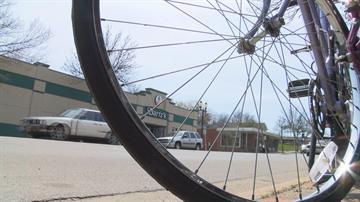 MILWAUKEE -- A lean, green machine is threatening Americans' long-standing love of the automobile, as bike shop owners say more of us are taking a spin on a hipper, healthier way to get around.

Nate Gorski is one of those who prefers to cruise to his job on two tires, rather than four, even though he has to plan ahead for his daily seven-mile commute, being sure to bring extra clothes, his tunes and a helmet.

\"My car works, and it's left sitting home in the driveway,\" said Gorski.

The sales associate is part of a growing contingent of consumers buying bicycles for more than just recreation.

\"We're really seeing the suburban customer who is thinking of new ways to enjoy riding their bike. And we're seeing more and more of them that are playing around with the idea of riding to work,\" noted Chris Kegel, president of Wheel & Sprocket bicycle shop.

As interest in biking shifts into high gear, the driving boom of the 20th century is running out of gas, according to reports from the U.S. Department of Transportation (DOT), the State Smart Transportation Initiative (SSTI) and the Wisconsin Public Interest Research Group (WISPIRG).

Data collected from those groups show the total number of miles driven by Americans declined for five straight years and the per capita miles have been dropping for nine straight years.

WISPIRG says it's because a new set of wheels doesn't mean the same thing to millenials as it did to baby boomers.

Ameen called his $900 \"beater Buick a piece of junk,\" but said he dropped $8,000 on his four bicycles, including the mountain bike he rides to work.

\"You can't get stuck in traffic. You can go at your own pace and enjoy the outdoors,\" added Ameen.

\"It's healthier, more exercise,\" responded 44-year-old teacher Joe Ward when asked why he was buying his first bike since he was a kid. \"I think it's a positive thing all the way around. And of course the global warming -- we're worried about gas emissions.\"

\"The owner provides us a full bathroom to use when we get here, so we don't smell bad for the customers. He even gives us an incentive to ride,\" enthused Gorski.

\"Your return on investment on even a $1000 bike, riding to work let's say three times a week over the course of the summer, you can save that in gas money, as far as where the average person lives. So you got your bike for free,\" described Kegel.

In Milwaukee, you don't even have to buy a bike.

For $8 dollars, you can rent one of 10 bikes at a kiosk at Discovery World -- the first of 30 such racks set to debut in Brew City this summer.

Riders will be able to go from station to station for one low fee per day, picking up and returning bikes to any of the self-service rental sites, which shall be located throughout Milwaukee in places such as Schlitz Park, U.S. Bank, Library Hill Apartments, Walker's Point, Third Ward, East Side and downtown.

Midwest Bikeshare is planning to roll out a network of nearly 200 stations with more than 1,000 bikes by 2018 in Milwaukee and the suburbs, so riders can tool around town without worrying about maintenance, storage or the price of gas.

More than 30 major cities -- including Chicago, Minneapolis and Washington, D.C. -- have launched bike sharing systems, along with small towns like Aspen, Colorado, and college campuses like University of Wisconsin at Madison.

If you have a story you'd like us to investigate, send an email to dmoca@cbs58.com.
Share this article: