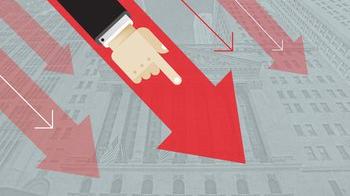 America's stock market is getting absolutely crushed. The Dow plunged more than 1,000 points at the open and the S&P 500 sank into correction territory on Monday as global fears about China's economic turbulence mounted.

The Dow is on track to suffer its worst percentage decline since 2008, the beginning of the scariest financial crisis since the Great Depression.

The wave of selling began overseas. China's Shanghai Composite plummeted 8.5%, wiping out all of its massive gains so far this year. Not only has an apparent bubble in Chinese equities popped, but the country's economy may be slowing more than feared.

China is engine of growth for many economies

China is the world's second-biggest economy. Its explosive growth in the last two decades has been the engine for the global economy. Its enormous appetite for raw materials like oil, copper and iron ore fueled global growth, especially in emerging markets like Brazil that are rich in natural resources.

But that story has been completely derailed by China's economic slowdown. Just how much China slows down matters greatly to investors.

All U.S. stock market indexes are in correction

Fears have grown so much about the health of China's economy that the S&P 500, made up the largest U.S. companies, is now sitting in \"correction\" territory -- a 10% decline from a recent peak.

Both the Dow and Nasdaq slipped into correction mode on Friday, the first since 2011.

The selling hasn't been limited to stocks. Crude oil plunged below $39 a barrel on Monday for the first time since 2009. A global economic slowdown is eating into demand for oil at a time when supplies remain extremely elevated.

Another sign of fear: The 10-year Treasury yield slid below 2% on Monday. That's the lowest level since April and a sign that investors are fleeing to the relative safety of American government debt. It also signals that Wall Street believes the Federal Reserve may have to delay its expected interest rate hike from September until later in the year or even 2016.